Shand started his career in journalism as a cadet on The Australian newspaper in the 1980s covering the rise and fall of entrepreneurs. In 1991, he joined the Nine Network reporting for Business Sunday in Sydney and Melbourne.

In the 1990s Shand worked for three years in Africa as a freelance journalist based in Zimbabwe for media organizations, covering historic events as the rise to power of Nelson Mandela in South Africa, the aftermath of the genocide in Rwanda and the corruption of Zimbabwe's democracy. He returned to Australia in 1997 and worked as a roving reporter for the Nine Network's Today program. Shand also continued to work in the print media, including stints on the Australian Financial Review newspaper in Sydney and Melbourne. In 2003, Shand proposed a unique role writing for The Bulletin magazine while also filing stories for the Nine Network's Sunday program. He held that role until the closure of both the magazine and the show.

He won a Walkley Award in 2007 with Frank McGuire for exposing police corruption in Victoria.[citation needed] During this time he covered Melbourne's bloody ganglands war for the Nine Network and The Bulletin. He also produced exclusive stories on Australia's outlaw biker clubs, Lebanese and Islander gangs in Sydney. He worked full-time for the Nine Network's flagship A Current Affair programme from 2008 until 2010. 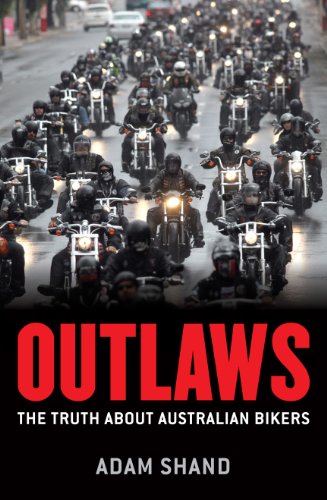 An investigation into Australia's bikie clubs. Are Australia's bikie clubs bastions of organised crime? Useful pawns in the political law and order game? Investigative journalist Adam Shand asks, just how bad are they? What's it like to be an outlaw biker? 'We're dickhead magnets,' one of them tells Adam Shand. 'Drunks in bars like to test themselves against a so-called outlaw.' Once seen as a free-wheeling, brawling, pleasure-seeking bunch of misfits rolling down the highways, bikers are now cast as social bogeymen. If you believe the dire warnings of the media and politicians, they are an organised crime threat on a global scale. Adelaide has long been regarded as the biker capital of Australia. Ten years ago South Australian Premier Mike Rann declared himself the nemesis of the biker community and he was committed to putting the clubs out of business with draconian new laws. Bikers have rarely explained themselves; they have worn their outcast status as a badge of honour. But in 2005, author Adam Shand went inside the world of the outlaws to understand whether such drastic measures were justified or whether this was a fear campaign designed simply to win elections. For the next six years, Shand mixed with bikers, talking to them about their lives and listening to their stories. He travelled with them on the road, spent time in their clubhouses, attended funerals and other club functions. He wanted to understand why men joined these secretive, arcane organisations which seemed to be at odds with the rest of society. What he found were not crime gangs but brotherhoods battling for their survival against threats from within and without. By 2011 the bikers had won historic victories in the High Court. As Mike Rann's premiership imploded, the bikers were still riding high and living free. The hysteria was beginning to ebb. Outlaws explains how all this came to pass.
Buy Kindle Version
Buy Paperback Version
Scroll to top