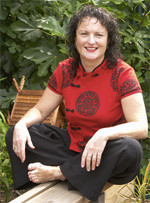 Angela Savage went to Southeast Asia in 1992 for six months and ended up staying six years. Based in Vientiane, Hanoi and later Bangkok, she managed a HIV/AIDS program for the Australian Red Cross that covered Laos, Vietnam, Cambodia, Burma and southern China. She returned home to Melbourne in 1998 determined to nurture her dream of becoming a published author.

Angela’s short story The Mole on the Temple won third prize in the Sisters in Crime Scarlet Stiletto Awards in 1998 and introduced Bangkok-based detective Jayne Keeney, the main character in her first novel, Behind the Night Bazaar, published by The Text Publishing Company in 2006.

Behind the Night Bazaar won the 2004 Victorian Premier’s Literary Award in the unpublished manuscript category (as Thai Died). It was shortlisted for the 2007 Ned Kelly Awards Best First Book and translated into German as Nachtmarkt.

Angela’s second novel, The Half-Child, was shortlisted for Best Fiction in the 2011 Ned Kelly Awards.

In the mid-1980s, Angela worked as an au pair in France, before completing an Arts degree at the University of Melbourne with Combined Honours in Criminology and the History & Philosophy of Science. Angela has published numerous articles based on her travels and her work in sexual health and international development.

Angela lived in Canberra from 1999-2002. In 2000-2004, her work as Director of the Sexual Health and Family Planning Australia International Program took her to countries throughout the South Pacific and back to Southeast Asia.

In 2008, Angela and her family lived in Cambodia where she wrote The Half-Child and worked as a consultant on HIV and harm reduction.

Angela has also published works of non-fiction and has collaborated on comics with Bernard Caleo (see here for other publications).

In 2014, she commenced a PhD in Creative Writing at Monash University in Melbourne, Australia, on the topic of commercial surrogacy between Australia and Thailand. She lives with her long-time partner, fellow crime writer Andrew Nette, and their daughter. 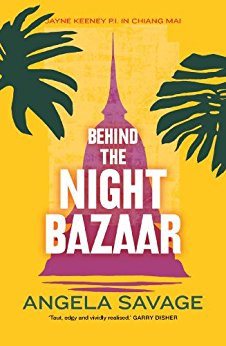 Thirty-something Australian Jayne Keeney works as a PI in Bangkok. Shaken by a serious incident, she heads north to visit her close friend Didier in Chiang Mai, though there's no relief for her there. Murder is in the air and the police, led by Lieutenant Colonel Ratratarn, have no interest in justice. But Jayne does. With some help from Arthur Conan Doyle, she digs deep - past the tacky glamour of the city's clubs and bars, arrogant expats, corrupt officials, and a steamy affair - to find out just what happened behind the Night Bazaar. Angela Savage has brought the streets of Thailand vividly to life. In Jayne Keeney she has created a gutsy heroine. This is an unforgettable debut novel and the start of an exciting new series. Angela Savage is a Melbourne-based crime writer, who has lived and travelled extensively in Asia. Her first novel, Behind the Night Bazaar won the 2004 Victorian Premier's Literary Award for an unpublished manuscript. She is a winner of the Scarlett Stiletto Award and has twice been shortlisted for Ned Kelly awards. textpublishing.com.au 'Taut, edgy and vividly realised, Night Bazaar delivers the ironies and moral complexities of the best crime thrillers.' Garry Disher 'Coolly elegant with a lovely sense of place...a lonely social crusader in the best hard-boiled tradition.' Weekend Australian
Buy Kindle Version
Buy Paperback Version 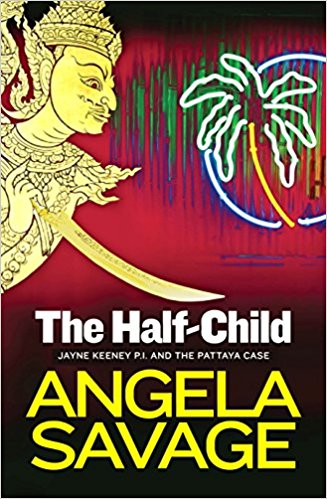 Jayne Keeney, PI, is hired to investigate the alleged suicide of a young expat woman in a seedy beachside town. But Maryanne Delbeck's death is not the only mystery awaiting Jayne among Pattaya's neon signs and go-go bars. Working undercover in the orphanage where Maryanne volunteered, Jayne discovers something far more sinister . . .
Buy Kindle Version
Buy Paperback Version 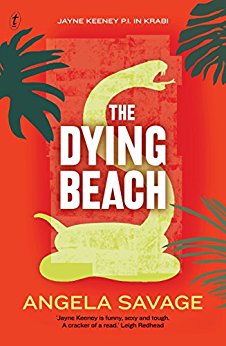 A new case for expat private investigator Jayne Keeney. As Jayne and Rajiv holiday in Krabi, Jayne can't stop her mind straying to thoughts of the future: a successful business, perhaps even a honeymoon. Who would have thought she could be so content? But then their tour guide's body is found floating in the shallows and no one can explain the marks around her neck. Jayne and Rajiv are pulled into a case that the police have already decided isn't one: a case that will pull at the seams of their fledgling relationships and lead Jayne into grave danger. Angela Savage is a Melbourne-based crime writer, who has lived and travelled extensively in Asia. Her first novel, Behind the Night Bazaar, won the 2004 Victorian Premier's Literary Award for an unpublished manuscript. She is a winner of the Scarlett Stiletto Award and has twice been shortlisted for Ned Kelly awards. 'The Dying Beach is a detective story rich in Thai culture...Jayne, who can speak Thai and knock about with the best of them, is an endearing character.' Readings Monthly 'With its intricate narrative structure, use of multiple points of view and flashbacks, this is Savage's most ambitious and accomplished crime novel to date.' Age 'Savage writes with dry humour and a beguiling sense of place, but a hard-boiled quality of meance underpins the light cleverness of her prose.' Weekend Australian 'Keeney is an appealing, flawed heroine.' Sun Herald 'From time to time I am reminded how spoilt we are in Australia with the depth of talent in the crime genre. The Dying Beach is Angela Savage's third novel in the 'Jayne Keeney PI' series and it's the perfect escapist read. It whisks you away to a warm location and once you're there, the quality of the writing and clever plot details make spending time with expat Jane and Rajiv, her partner in life and love, a very enjoyable experience indeed...For crime fans this novel ticks all the boxes, but it would also appeal to anyone looking to escape their everyday routine with a ripper read.' Good Reading 'The Dying Beach is a love story as well as a tightly plotted crime thriller...deft and unobtrusive characterisation...is a mark of both the humour and insight that is a hallmark of Angela Savage's writing, and the reason I've been recommending it to so many people.' David Whish-Wilson 'Sun-drenched beaches, sex, death, corruption, environmental destruction, and cobras - what more could you want in a crime novel?' The Hoopla 'The Dying Beach...is a stylish, intriguing and entertaining novel featuring an appealing protagonist.' Book'd Out blog 'The Dying Beach has it all: an exotic, evocative setting; terrifically drawn characters including good guys you can't help but like and a story that manages to be thought-provoking and an edge-of-your-seat ride at the same time. Highly recommended.' Fair Dinkum Crime blog
Buy Kindle Version
Buy Paperback Version
Scroll to top