Anna Haebich is a leader in the history profession, who has contributed to Aboriginal history and policy. She has also also worked as a curator, artist and art historian. She is known for her multi-disciplinary and cross-cultural approaches to her research.

Anna Elizabeth Haebich was born on 18 December 1949 in Toowoomba Queensland. Her parents are Bert Haebich and Ruth Gordon. She was educated at Wollongong High School and. In 1972 Haebich was awarded her BA (Hons) in Anthropology, from the University of Western Australia and went on in 1985 to complete a PhD at Murdoch University. She also completed studies in Fine Arts, graduating with a BA (Fine Arts) from the School of Art, Curtin University in 1994, and was the top graduating student in both Painting and Visual Culture.

In 2003 Haebich was awarded a Centenary of Federation Medal for Services to Australian Society and Literature. She was elected. In 2006 Haebich was elected a Fellow of the Australian Academy of the Humanities and Fellow of the Queensland Academy of Arts and Sciences and a Fellow of the Academy of the Social Sciences in Australia in 2007 when she was also appointed as an Honorary Associate of the Queensland Museum. In 2010 she became a Member of the Council for the Australian Academy for the Humanities and was elected Vice President in 2011. She is also an ARC expert of international standing and was member of the Australian Institute of Aboriginal and Torres Strait Islander Studies (AIATSIS) Research Advisory Committee (2010) and is a Member, Executive Committee of Australian DAAD Alumni Committee - Deutscher Akademischer Austausch Dienst.

Haebich has published widely on Indigenous history and Australia's discriminatory policies and practices. For Their Own Good: Aborigines and Government in the South West of Western Australia 1900 to 1904 (1992) is a seminal work on the impact of Australia's discriminatory policies and laws. The book won the 1989 Western Australian Premier's Literature Award for Non-Fiction. Her publication Broken Circles Fragmenting Indigenous Families 1800-2000 (2000) is the first and most comprehensive national history of Australia's Stolen Generations. Broken Circles is the outcome of a close collaboration with Aboriginal people and wide-ranging historical and field research. Haebich received the NSW Premier's Book of the Year, Gleebooks Prize, NSW Premier's Literary Awards and the Stanner Award, Australian Institute of Aboriginal and Torres Strait Islander Studies for Broken Circles, which was also short-listed for annual literary award by Courier Mail, Age, Human Rights Commission (Honourable Mention), Queensland Premiers Award, WA Premiers Literature Award, NSW Premier's History Award and Adelaide Festival Awards for Literature. Spinning the Dream Assimilation in Australia is a meticulously researched assessment of the implications of assimilation for Australia's Indigenous and ethnic minorities and for immigration and refugee policy, was short-listed for the New South Wales Premiers Literary Award in 2008. Haebich and Doreen Mellor edited Many Voices Reflections on Experiences of Indigenous Child Separation (book with audio recordings), for the National Library of Australia (2002). Her most recent book Murdering Stepmothers the Execution of Martha Rendell (2010) is a ground-breaking fictional interpretation of a controversial murder case for which Haebich received the Margaret Medcalf award for excellence in research and referencing in using the state archives collection in 2011.

Haebich's husband, Darryl Kickett, is a Nyungar man, and she is part of his extended family from the South-West of Western Australia. She has three stepdaughters and one stepson, six grandchildren and three great-grandchildren. 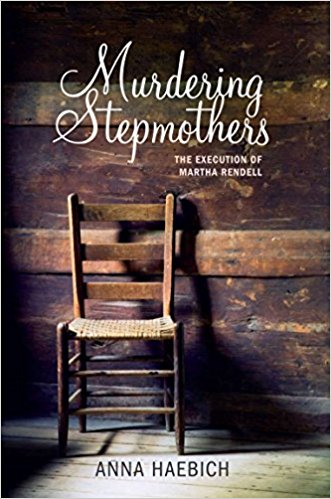 It's 1909 in Perth, Australia, and sensational rumors of the murder of three small children by their stepmother ignite the passions of the citizens. Shocked by horrific descriptions of how Martha Rendell poisoned the children, Perth's citizens - as one voice - demanded her execution. But did Martha Rendell truly do it? Or was she a victim of the prejudices of her persecutors? Based on a true story and meticulously researched, this compelling novel is driven by passion, imagination, and an eerie conjuring up of the past. Author Anna Haebich brings to life the people of Perth and the entangled mesh of self-righteous bigotry, slander, and unbridled revenge that they invoked to propel the trial of Martha Rendell to its inevitable end. The book documents the accused woman's downward spiral from her dreams of a new beginning with her lover to a life of domestic drudgery and deceit; then her final days on the edge of the abyss - becoming the last woman in the state to be hanged. Murdering Stepmothers is told from the perspective of five different characters - the doctor, the priest, the photographer, the researcher, and the detective. The book creates a fresh, vivid, fusion of factual history and insightful imagining. Inspired by the author's shared experiences as a stepmother, which perpetuated a desire to tell Martha's story without sensationalism, it tackles the very serious, and still relevant, questions of conviction, evidence, legal processes, and right to re-trial.
Buy Paperback Version
Scroll to top