Anthony has been writing for children, young adults, and adults since the late -1990s. He has published eleven novels, completed his PhD in creative writing, and somehow managed to avoid having a complete nervous breakdown. He has twice won the Western Australian Premier’s Literary Award for young adult fiction, and twice been awarded the Honour Book prize in the Children’s Book Council of Australia annual Book of the Year awards. His works have also featured on the International Youth Library’s annual White Ravens catalogue of significant international children’s books.

At the end of 2005 he traveled to Antarctica to research his novel Into White Silence which received critical acclaim, including an Honour Book Prize in the 2009 CBCA awards and a shortlisting in the Queensland Premier’s Literary Awards. In late 2011, Random House Australia re-published a literary edition of Into White Silence for the adult marketplace.

His Darklands Trilogy have been shortlisted and awarded in the Aurealis Awards for Australian Speculative Fiction. The final book of the trilogy, Daywards, was released by UQP in March 2010, and was a CBCA notable Australian Children’s book in 2011

He lives in Canberra with his wife, two kids, an aging and slightly deranged kelpie cross named Chelsea and a completely deranged Rhodesian Ridgeback named Nala. And 2 chickens. He is an Associate Professor of Creative Writing and Literary Studies at the University of Canberra, where he researches the contemporary influence of Young Adult fiction upon cultural discourse, among other things. He is currently working on a Cyberpunk duology, and a very odd fairy tale. 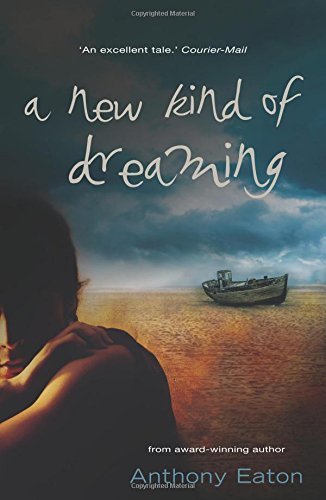 A powerful mystery from award-winning author Anthony Eaton, this edition of A New Kind of Dreaming is a special reissue of a modern Australian classic Jamie Riley has hit rock bottom. Busted for stealing cars, he's been shipped off to serve time in Port Barren, a stinking hot town stuck between the desert and the sea. The minute Jamie arrives, he can feel something is not quite right about Port Barren—the town has a past it doesn't want to share. After being warned that Port Barren is his last chance before jail, Jamie resolves to serve his time and get out. But when he discovers an old, wrecked boat on the beach and starts asking questions, it becomes obvious that local cop Elliot Butcher has it in for him. As he gets closer to the truth, things start going wrong around town. With no one else to blame, Jamie realizes surviving Port Barren is going to be way harder than he thought.
Buy Kindle Version
Buy Paperback Version
Scroll to top