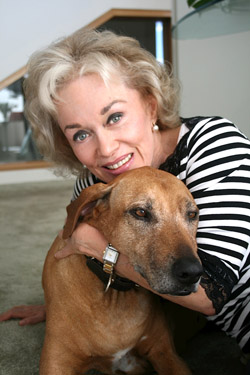 A brief history of Blanche."
blanche and chippy sml
Blanche and 'Chippy' 2009
Like many Australians, Blanche d'Alpuget's ancestors were adventurous. Gustave d'Alpuget, in the French merchant navy, left his home town, Bordeaux, when economic collapse followed the destruction of the wine industry. He sailed to the South Pacific and using Sydney as his base, traded copra and pearls for manufactured goods. According to d'Alpuget family legend he had six Polynesian wives (as well as his Sydney wife). Blanche's English grandfather, a physician, was banished by his family to the colony of New South Wales for siring two children while a student at Oxford. Another great grandfather was an Irish ‘ribbon man’, transported for rebellion against the Crown.

Blanche d'Alpuget grew up in Sydney, an only child. Her father wanted Blanche to become a marine biologist and find in the sea a new source of food for humanity. (At the time it seemed an over-populated world was doomed to starvation.) This dream collapsed in a d'Alpuget family drama. Blanche left university after a few months and became a cadet journalist. On her 21st birthday she sailed to England and traveled for the next nine years, spending most time in Indonesia. By her return, Blanche was married and had a baby son. They lived in Canberra. As Blanche wanted to stay close to her son and knew she had a wealth of exotic anecdotes, rather than taking a newspaper job, she decided to try her hand at writing. Her husband generously supported her.

Blanche says she started with fine, careless rapture and no idea of what she was doing. She wrote a novel set in Indonesia. A score of rejections greeted it.

Luck came when Sir Richard Kirby, chief justice of the Conciliation and Arbitration Commission, asked Blanche if she’d be interested in writing his biography. He had worked in Indonesia at the end of WWII. Blanche knew nothing of industrial law, but loved research and Kirby loved mentoring. The first publisher she approached, the prestigious Melbourne University Press, accepted it. She re-wrote her Indonesian novel (Monkeys in the Dark) and found a publisher immediately. Until then, she had described herself as a housewife. Once two books were published she realized she had "a difficult but joyous career". Writing was bliss.

Blanche's next novel was Turtle Beach (made into what she and others consider a rather dreadful movie, but one still shown on cable TV).

She had learned a lot about industrial law and the trade unions for the biography of Sir Richard. Blanche decided on a biography of the leader of the Australian Council of Trade Unions, whom she'd met years earlier (in Indonesia), a swashbuckling folk hero called Bob Hawke. At the time she began research he decided he wanted to run for Parliament. There was only one job he wanted: the Prime Minister’s.

Blanche finished his biography a few months before the general election. When he became Prime Minister, her book rocketed. She hated the loss of anonymity and left for Israel, a country she'd visited for research, thinking it offered enticing potential for a novel.

geoffery sml
Geoffrey the Handsome,
father of The Young Lion.
She had already researched for months, reading the Bible from cover to cover, and 100 other books on Israel and Jewish history. The result was Winter in Jerusalem, that won the prestigious inaugural Commonwealth Award for Literature, Australasian Division. But Blanche returned to Australia, exhausted. She wrote a novel, White Eye, about the threat of bio-terrorism and cruelty to animals used in scientific research. She wrote, she said, not for the bliss of writing but to fulfill a publishing contract. Like Turtle Beach and Winter in Jerusalem, it was published in various countries and various languages, but she had no joy in it. Her marriage was over. Blanche moved to Sydney. She tried screen writing without success. She wrote book reviews and an essay, Lust, that caused a media fuss. Blanche already had a slew of awards and prizes; she’d worked very hard for twenty years, she decided her days of writing were over. Blanche devoted her time to membership of boards, including a year as Chair of the Australian Society of Authors.

In 1995 Bob Hawke, with whom Blanche had had a love affair, married her. The news media forgot she was a novelist whose books were read around the world. It re-badged her “Bob's biographer”. Her years of writing were air-brushed away. Life in a glass house began. Blanche and Bob were a cynosure for Peeping Toms (re-badged ‘photographers’). The couple spent the next 15 years establishing a consulting company, traveling, enjoying plenty of razzle-dazzle and doing charity work.

In 2008 the new publisher of Melbourne University Press, Louise Adler, asked Blanche to write an essay. She wrote On Longing, built on feelings that had arisen from her mother’s death. Louise next asked her to update her biography of Bob Hawke to cover his years as Prime Minister. By the time that book was finished she had rediscovered the bliss of writing and had a topic for a series of historical novels: Henry II, Eleanor of Aquitaine and the glorious 12th century. Blanche had been interested in this era since her twenties.

The first novel, The Young Lion, was published in September 2013. Links to it can be found on the Harper Collins website. It was judged one of the most desirable books of 2013. The second book in the series, The Lion Rampant, appeared in 2014 to critical acclaim. Thomas Keneally said, "This is fresh and invigorating and absolutely gripping. The revision she provides of the motives and character of Thomas Becket will rivet readers as they have not been riveted since Hilary Mantel's Thomas Cromwell." She completed the third of the series in late 2015, but has held it back from publishing until she finishes the quartet, in early 2017. Many readers of the first two books have written asking "Where’s the next one?" Her answer is, "The whole four should be available in late 2017." The quartet will be subtitled "The birth of the Plantagenets."

Blanche says "About this series, before I began writing, I did a mile of reading and spent weeks touring England and France. I was fortunate to have historians as tour guides and a French friend who loves to research French internet sites. There is a world of difference between travelling for fun, as I had, frequently in England and France, and traveling for research."
climbing castle sml
Blanche d'Alpuget at the Castle of the Black Falcon,
Count of Anjou, crusader, wife-murderer
and ancestor of The Young Lion
The trips Blanche made for The Young Lion were focused on places of significance for Henry and his wife, Eleanor of Aquitaine. War and revolution have wrought devastation, particularly in Normandy. The city of Rouen, that features strongly in the book, was bombed during World War II. Many of Henry's castles in France were ruined during the One Hundred Years War. During the French Revolution royal tombs, including Henry and Eleanor's, were dug up and their bones scattered about. The effigies of the deceased king and queen were vandalised beyond repair. In England, Henry VIII destroyed innumerable religious buildings. Henry's II's palaces and hunting lodges in England were destroyed by war, revolution and fires, but his castle at Dover withstood German bombing. Despite destruction, there was still a great deal to see, especially the countryside. Blanche chose to stay as far as possible from towns, to get a feeling of the quiet of those days, the darkness of their nights and the beauty that surrounded people in the 12th Century.

All Blanche's novels are in print and e-books. Her biography of Hawke is now published as two books because it was too big to have as one. They are Hawke: the Early Years and Hawke, the Prime Minister.

In April/May of 2017 she will travel with a small group from France, via Greece to Jerusalem on the route taken by the Knights Templar for the Second Crusade. She has long been interested in the Templar knight, Hostes St Omer, a friend of Henry II. 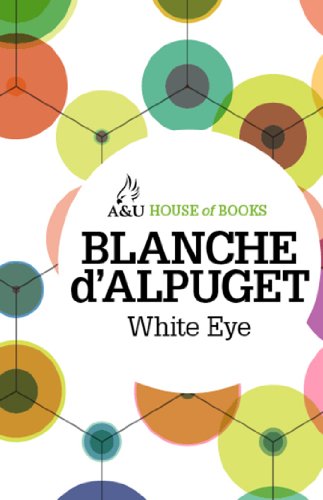 Animal rights activist Diana Pembridge is embroiled in a tangle of scientific corruption and sexual scandal when her friend, scientist Carolyn Williams, is found murdered. At a remote biotechnological research centre in the Australian outback, chief scientist John Parker is developing a virulent and contagious chimera, a fatal bacterium for which there is no cure. When a young female scientist is found murdered at the research facility, John encounters Diana Pembridge, an animal rights activist who suspects there is more to John's work than meets the eye. Diana has dedicated her life to caring for majestic birds of prey. When she discovers the body of her childhood friend near the research station, she immediately suspects murder. Her questioning leads her into a web of scientific corruption. But when people will go to deadly lengths to protect their secrets, getting too close to the truth threatens to lead to her own demise. Blanche d'Alpuget examines complex ethical questions about biotechnology, animal experimentation and wildlife trafficking, but also explores broader issues of freedom, love and gender equality. She skilfully unfolds the dramatic conflicts that define both the human and animal worlds.
Buy Kindle Version
Buy Paperback Version
Buy Hardback Version
Scroll to top