Born in England, Alan Yates married and settled in Australia in 1948. He began his working life as a film technician, a salesman and in public relations for Qantas before taking up writing full-time.

Yates soon became a literary phenomenon. He wrote westerns under the pseudonym Todd Conway, and science fiction under Paul Valdez. He even found the time to write books under various versions of his own name as well as other pseudonyms, Dennis Sinclair and Sinclair MacKellar. But it was his pseudonym Peter Carter Brown then later, Carter Brown ('Peter' was dropped for the US market) who was to become the international best-selling pulp fiction author.

The extraordinary early success of Carter Brown in the 1950s meant that Yates was contracted to produce one short novel and two long novels each month. In reality, Yates was truly prolific with 322 published Carter Brown novels, including multiple series variously featuring protagonists Mike Farrell, Andy Kane, Mavis Seidlitz, Lt. Al Wheeler, Rick Holman, Danny Boyd, Larry Baker, Zelda Roxanne, et al. Yet despite the enormity of his output, a 1963 profile in Pix magazine revealed he approached deadlines 'with the reluctance of a long-distance swimmer shivering on the brink of a cold, grey English Channel. In the manic depressive moments of the third night without sleep – when the deadline is long past and the mental block has set solid as concrete, the writer inevitably descends into self-analysis. He knows, of course, that it will be no more help than the last Dexedrine tablet but still clings to the naïve hope that, somehow, sometime, he will find a way of avoiding the recurrence of his present hopeless situation.’

His books, originally published by Horwitz and Signet, were set in the United States and published throughout the anglophone world. In its obituary for Yates in 1985, The New York Times noted that he had written "some 30 detective novels with American backgrounds before ever having visited the United States ... He said he chose American settings because Australians preferred them."

A rumour spread at the height of his popularity that Yates was one of John F. Kennedy's favourite authors – a rumour which helped propel his sales even further in the North American market.

Carter Brown's huge international success saw reportedly 120 million books in print, second only to The Bible in terms of the number of languages into which they were translated. The success of the books also spawned a comic book series, the 'Carter Brown Murder Mystery Hour' on radio, three French films, a Japanese TV series, and a French literary award for 'The most whiskies drunk in a single novel'.

In the early 1980s, Yates and Richard O'Brien of The Rocky Horror Show fame wrote a musical of The Stripper, described in classic Carter Brown terminology as 'the girl who says it all from the neck down'.

Yates died of a heart attack in 1985 in Sydney. In 1997, he was posthumously awarded a Ned Kelly, Australia's leading literary award for crime writing, for his lifelong contribution to the art. 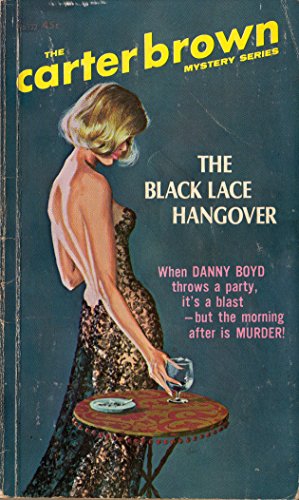 Once the world's most popular pulp author, with over 50,000,000 books in print, Carter Brown's work was sadly lost to time. But now, thanks to painstaking digital reconstruction, compiled from crumbling unearthed treasures, the master of crime, murder and femme fatales is back!
Buy Kindle Version
Buy Paperback Version
Scroll to top