The major phase of McLaren's real life police career took place during the 1980s and 1990s. McLaren rose through the police ranks rapidly and when asked to join an elite covert surveillance unit, he began spying on drug importers and the ringleaders of organised crime, before going undercover and organising covert stings. As a member of some of the most high-profile task forces in Australia, McLaren, as a suit and tie detective, worked on the Walsh Street murders of police constables Steven Tynan and Damian Eyre,[1] the Mr Cruel child rapes and the murder of thirteen-year-old Karmein Chan,[2] and the bombing of the Adelaide NCA police headquarters where he was task force leader. McLaren then went undercover, where for two years he infiltrated Australia's mafia in the guise of a money laundering art dealer, in what is still the largest undercover sting in Australian history. Eleven Mafia bosses received sentences of up to 13 years each for major drug trafficking and racketeering.[2] He also went undercover for another year to gain evidence on the Mafia responsible for the NCA bombing. Six mafia were jailed. He ended his police career as a permanent lecturer at the detective training school, his subject was 'crime scene management' and 'field investigations 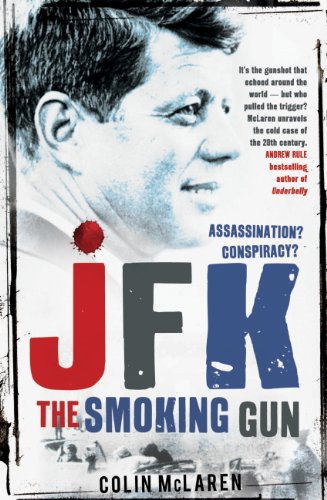 Assassination? Conspiracy? Evidence of the shocking truth is finally revealed. 'Shocking new details' - Herald Sun On 22nd November 1963, the 35th president of the United States, John Fitzgerald Kennedy, and his wife Jackie were taking part in a presidential motorcade through Dallas. Thousands lined the streets cheering; others hung out of windows to catch a glimpse of the much-loved First Lady and President. Suddenly, the unthinkable: three shots - bang...bang, bang - rang out. In front of the world, John F Kennedy was fatally wounded. Lee Harvey Oswald was caught. But did he fire the fatal bullet? Who REALLY killed JFK? Fifty years after the tragic events in Dallas, JFK: The Smoking Gun solves the ultimate cold case. With the forensic eye of a highly regarded ex-cop, Colin McLaren gathered the evidence, studied 10,000 pages of transcripts, discovered the witnesses the Warren Commission failed to call, and uncovered the exhibits and testimonies that were hidden until now. What he found is far more outrageous than any fanciful conspiracy theory could ever be. JFK: The Smoking Gun proves, once and for all, who did kill the President.
Buy Kindle Version
Buy Paperback Version
Scroll to top