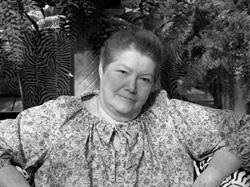 Colleen McCullough was born in Australia. A neuropathologist, she established the department of neurophysiology at the Royal North Shore Hospital in Sydney before working as a researcher and teacher at Yale Medical School for ten years. Her writing career began with the publication of Tim, followed by The Thorn Birds, a record-breaking international bestseller. She lives on Norfolk Island in the South Pacific with her husband, Ric Robinson. 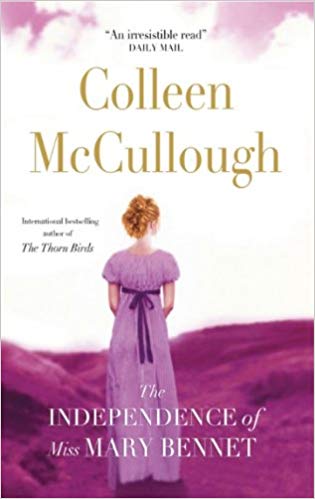 The Independence of Miss Mary Bennet

Readers of Pride and Prejudice will remember that there were five Bennet sisters. Now, twenty years on, Jane has a happy marriage and large family; Lizzy and Mr Darcy now have a formidable social reputation; Lydia has a reputation of quite another kind; Kitty is much in demand in London's parlours and ballrooms; but what of Mary? Mary is quietly celebrating her independence, having nursed her ailing mother for many years. She decides to write a book to bring the plight of the poor to everyone's attention. But with more resolve than experience, as she sets out to travel around the country, it's not only her family who are concerned about her. Marriage may be far from her mind, but what if she were to meet the one man whose own fiery articles infuriate the politicians and industrialists? And if when she starts to ask similar questions, she unwittingly places herself in great danger?
Buy Paperback Version
Buy Hardback Version 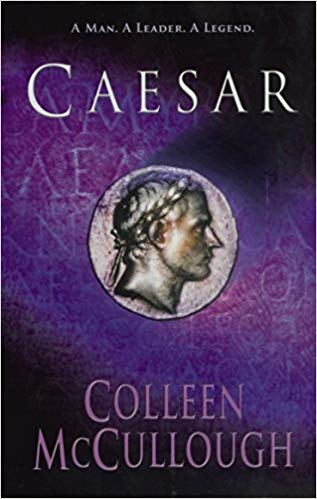 The fifth book in the epic Masters of Rome series. Gaul. 54 BC. Julius Caesar sweeps across Gaul, brutally subduing the united tribes who defy the Republic. But, at home, his enemies are orchestrating his downfall and disgrace. Vindictive schemers like Cato and Bibulus, the spineless Cicero, the avaricious Brutus. Even Pompey the Great, Caesar's former ally. But all have underestimated Caesar. And when the Senate refuse to give him his due he marches upon his own country, an army prepared to die for him at his back. For rome is his destiny - a destiny that will impel him triumphantly on to the banks of the Rubicon, and beyond, into legend, as the noblest Roman of them all.
Buy Paperback Version
Buy Hardback Version 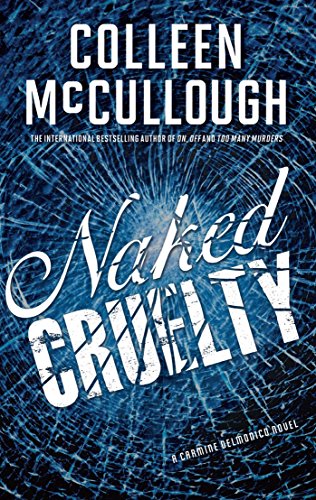 Carmine Delmonico returns in another riveting page-turner by international bestselling author Colleen McCullough. America in 1968 is in turmoil and the leafy Holloman suburb of Carew is being silently terrorized by a series of vicious and systematic rapes. When finally one victim finds the courage to speak out and go to the police, the rapist escalates to murder. For Captain Carmine Delmonico, it seems to be a case with no clues. And it comes as the Holloman Police Department is troubled: a lieutenant is out of his depth, a sergeant is out of control, and into this mix comes the beautiful, ruthlessly ambitious new trainee, Helen MacIntosh, daughter of the influential president of Chubb University. As the killer makes his plans, Carmine and his team must use every resource at their disposal—including a highly motivated neighborhood watch, the Gentlemen Walkers.
Buy Kindle Version
Buy Paperback Version 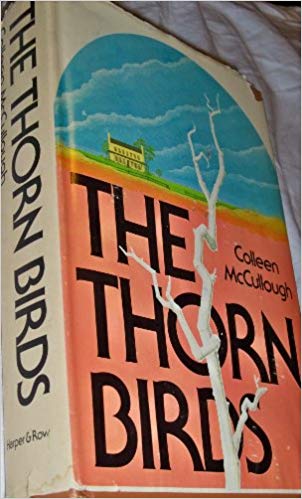 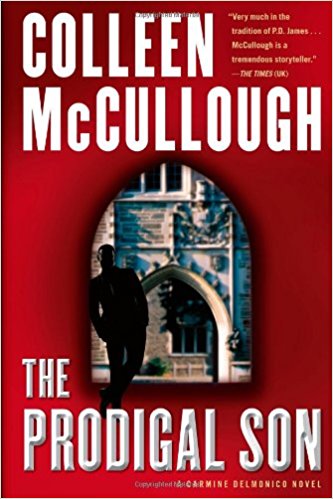 Internationally bestselling author Colleen McCullough presents a new novel in the thrilling, gritty series featuring Captain Carmine Delmonico, who must find a brilliant killer hiding out in the prestigious and cutthroat world of academia. Carmine Delmonico returns in this heart-pounding thriller from internationally acclaimed bestselling author Colleen McCullough. HOLLOMAN, CONNECTICUT, 1969. A lethal toxin, extracted from the blowfish, is stolen from a laboratory at Chubb University. It kills within minutes and leaves no trace behind, and worried biochemist Dr. Millie Hunter reports the theft at once to her father, Medical Examiner Dr. Patrick O’Donnell. Patrick’s cousin Captain Carmine Delmonico is therefore quick off the mark when the bodies start to mount up. A sudden death at a dinner party followed by another at a gala black-tie event seem at first to be linked only by the poison and the presence of Dr. Jim Hunter, a scientist on the brink of greatness and husband to Millie. A black man married to a white woman, Dr. Jim has faced scandal and prejudice for most of his life, so what would cause him to risk it all now? Is he being framed for murder—and if so, by whom? Carmine and his detectives must follow the trail through the university town’s crowd of eccentrics, no matter how close to home it may lead.
Buy Paperback Version
Buy Hardback Version 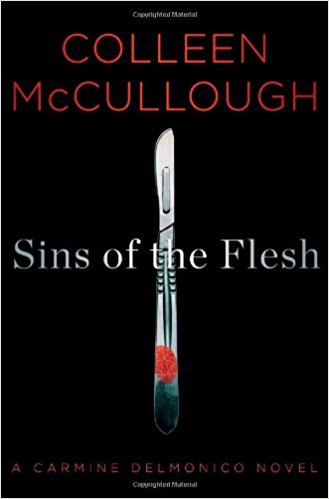 Sins of the Flesh: A Carmine Delmonico Novel

In the next installment in the “compelling, passionate, and gritty” (Daily Mail, UK) suspense series, police Captain Carmine Delmonico is on the trail of not one but two killers. “Some men and women, she reflected, fell into their proper profession, the only one they were eminently crafted to do. And this man was one such. Highly intelligent without the spark of genius, well educated without being entrapped by his learning, nigh infinitely patient, rational to the core yet subtle, empathetic when it suited him, and endowed with an analytical brain. A policeman by nature who might successfully have done a dozen other things for a living, but had lit upon the one he was made for.” It’s August 1969, and police Captain Carmine Del­monico is away on a family vacation. Back at home, in the sleepy college town of Holloman, Connecticut, first one, then two anonymous male corpses turn up—emaciated and emasculated. After connecting the victims to four other bodies, Sergeant Delia Carstairs and Lieutenant Abe Goldberg realize that Holloman has a psychopathic killer on the loose. Luckily, Carmine’s beloved wife Desdemona sends him home from vacation early. Carmine’s team begins to circle a trio of eccentrics, who share family ties, painful memories, and a dark past. They readily admit to knowing all the victims, but their stories keep changing. It’s awkward that one of them is a new friend of Delia’s, a woman she recently befriended along with the respected and innovative head of the mental hospital, who has been rehabilitating one very difficult patient to be her trusted assistant. When another vicious murder rocks Holloman, Carmine realizes that two killers are at large with completely different modus operandi. Like Delia, he finds this case too close to home when he barely escapes being next on the body count. Sud­denly the summer isn’t so sleepy anymore. Colleen McCullough’s riveting Carmine Delmo­nico books take you back to a time when detectives relied mainly on logic, intelligence, and instinct—and a good home-cooked meal or breakfast at Malvolio’s with colleagues. Sins of the Flesh is her finest mystery yet, pitting her beloved hero against every cop’s nightmare scenario in a plot that turns on the science that McCullough herself knows so well.
Buy Paperback Version
Buy Hardback Version 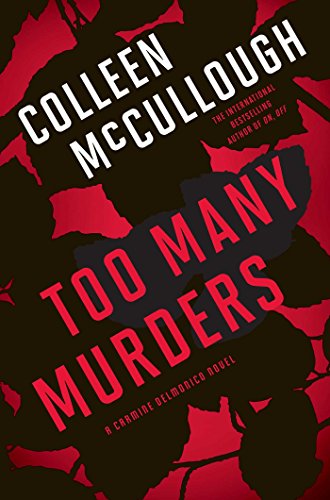 Proving once again that she is a master of suspense, bestselling author Colleen McCullough returns with a riveting sequel to On, Off. The year is 1967, and the world teeters on the brink of nuclear holocaust as the Cold War goes relentlessly on. On a beautiful spring day in the little city of Holloman, Connecticut, home to prestigious Chubb University and armaments giant Cornucopia, chief of detectives Captain Carmine Delmonico has more pressing concerns than finding a name for his infant son: twelve murders have taken place in one day, and Delmonico is drawn into a gruesome web of secrets and lies. Supported by his detective sergeants Abe Goldberg and Corey Marshall and new team member the meticulous Delia Carstairs, Delmonico embarks on what looks like an unsolvable mystery. All the murders are different and they all seem unconnected. Are they dealing with one killer, or many? How is the murder of Dee-Dee Hall, a local prostitute, related to the deaths of a mother and her disabled child? How is Chubb student Evan Pugh connected to Desmond Skeps, head of Cornucopia? And as if twelve murders were not enough, Carmine soon finds himself pitted against the mysterious Ulysses, a spy giving Cornucopia's armaments secrets to the Russians. Are the murders and espionage different cases, or are they somehow linked? When FBI special agent Ted Kelly makes himself part of the investigation, it appears the stakes are far higher than anyone had imagined, and murder is only one part of the puzzle in the set of crimes that has sent Holloman into a panic. As the overtaxed police force contends with small town politics, academic rivalry and corporate greed, the death toll mounts, and Carmine and his team discover that the answers are not what they seem -- but then, are they ever?
Buy Paperback Version
Buy Hardback Version 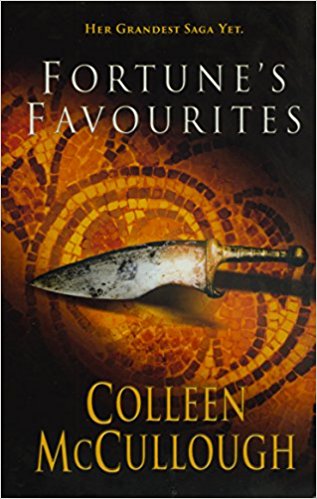 Tells the story of the power and cunning of two Rulers of Rome - Sulla, returning from exile, and the 22-year-old Pompey, who designates himself Magnus The Great. And in the background is the young soldier, Caesar, who begins to show the expert qualities that will one day culminate in him becoming the unparalleled leader of ancient Rome.
Buy Paperback Version 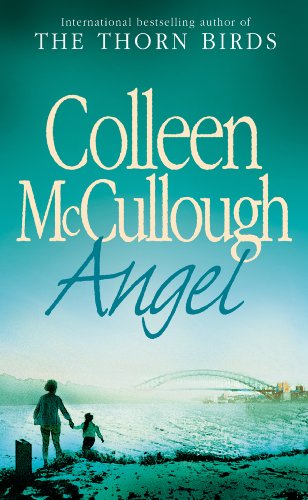 The bestselling author of THE THORN BIRDS returns with a novel of laughter, passion and more than a little magic … 1960, Sydney's Kings Cross. Harriet Purcell leaves her conventional, respectable home and respectable, passionless boyfriend and moves into a rooming house owned by Mrs. Delvecchio Schwartz. There, Harriet finds a life she relishes – excitement, adventure and passion. Mrs. Delvecchio Schwartz makes a living from telling fortunes, and is mother to 4-year-old Flo. Beautiful little Flo is mute, and Harriet comes to love her as if Flo were her own – and must protect her at all costs when tragedy strikes… Angel is Colleen McCullough at her vintage best, drawing on her own experiences of living in the Cross in the 1960s and writing of a world that has long gone. Most of all, it is a tale of a woman's love for a child, and what she is prepared to endure to ensure her survival.
Buy Kindle Version
Buy Paperback Version
Buy Hardback Version
Scroll to top