avid Spiteri was a founding member and President of one of Australia's first biker gangs. He is retired from the club now. He saw outlaw motorcycle clubs (OMCs) develop from loose affiliations of like-minded riders to the well structured and well connected groups we see today, with links to police, politicians and lawyers. David wrote about his own personal journey in his first book 'The Prez'.

David has now released three books, 'The Prez'; 'Stoker Munro - Survivor' and 'The Biker and the Bankers Daughter'... with more books on the way. 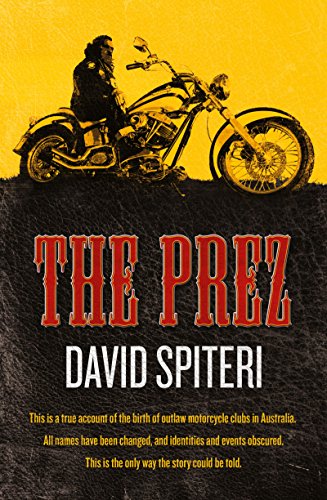 The true story of forty years inside one of Australia's first outlaw motorcycle clubs as told by its one-time president. With previously unrevealed insights into the outlaw world of extreme violence, drugs, corruption, sex, treachery and retribution. All names have been changed, and identities and events obscured. This is the only way the story could be told. 'this story is a true account of the birth of outlaw motorcycle clubs in Australia. there was no template for us, it just evolved. It shows our simple creed: loyalty to the club and respect for your brothers.' David Spiteri was a founding member and long-time President of one of Australia's first outlaw motorcycle clubs from its inception in the early 1960s through to the early 2000s. He has been uniquely placed to witness the clubs develop from loose affiliations of riders to the well structured and well connected groups we see today, with links to police, politicians and lawyers. In this never-before-told inside story, Spiteri puts himself at risk to reveal everything from the drug trafficking which funds the clubs' operations to the extreme violence that continues to make them infamous. For the first time, the true extent of the clubs' corruption will be exposed, and the treachery and subsequent retribution enforced by their own brand of law known as 'the code' is brought to light. A truly shocking and compelling look at a fascinating subculture.
Buy Kindle Version
Buy Paperback Version
Scroll to top