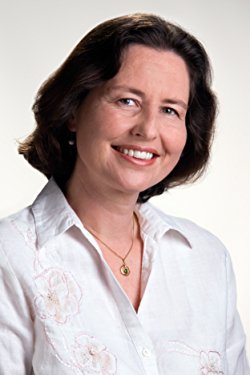 As a teenager, Ebony lived and worked in her family's restaurant, which provided much of the inspiration for the Ondine novels. Ebony waitressed, prepared food - and yep - washed dishes. So many dishes.
In the 1990s she worked as an award winning journalist on many leading Melbourne newspapers. By day she wrote other people's stories, but by night she plotted epic adventures. Now she writes novels for a living.
Ebony McKenna lives in Melbourne, Australia with her husband and young son.
She loves gadgets and anything futuristic. Doctor Who and The Goodies have always been TV treats. A weekly trivia night at the local pub allows her to show off her knowledge of 1980s pop music. She recently appeared on the TV quiz show Million Dollar Minute, where she was the reigning champion across 4 nights.
Coffee, chocolate and Facebook games are her worst vices. Playing with her son's toys is fun and reading to him at bedtime is a joy.
A huge influence was British humorist and author Frank Muir. For sixteen years Ebony and Frank swapped letters filled with family anecdotes and stories. They later met in 1995, dining at The Groucho Club in London. While there, one of her other literary heroes, Douglas Adams, was pitching "something rather exciting and complicated to a couple of suits at the next table." 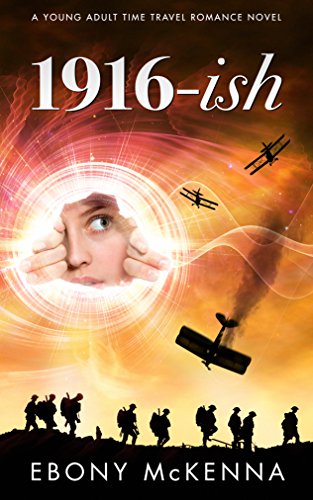 Romance, time travel and daring adventure await Australian student Ingrid Calloway as she journeys to France in this Young Adult alternate-history novel from Ebony McKenna. Little does Ingrid know that when she joins in a war-games re-enactment with her exchange brother and sister, it will turn into the real thing. Real guns, real dangers and real bullets put them in mortal peril in the midst of the First World War. Suddenly Ingrid’s fighting two battles at once; one for her personal safety and another against her growing attraction to Luc, who looks super-hot in uniform. Life in 1916 France soon takes a nasty turn - because the Eiffel Tower isn’t even there. They’re not just stuck in the past; they’re in a parallel world. How can they dodge the bullets of history when history won’t follow the script? The trio must accept that the only way back to safety is the way they came. They must face the terrible frontlines in a last ditch effort to get home. 1916-ish. History, with a twist.
Buy Kindle Version
Buy Paperback Version 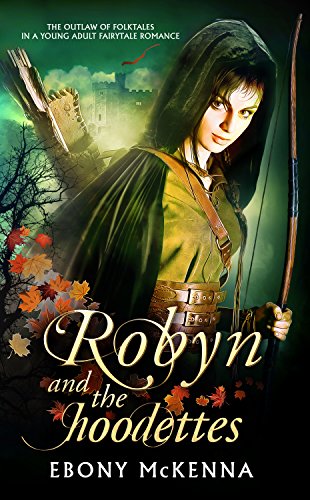 Robyn & The Hoodettes: The Outlaw of Folktales in a Young Adult Fairytale Romance

A thrilling retelling of the Robin Hood adventure with a fun gender flip. When tax collectors raid her village, headstrong peasant Robyn vows to take everything back. Her righteous spirit lands her on the 'wrongteous' side of the law. Attempts to fix things only makes life worse as Robyn, and her best friend Marion the blacksmith's son, fall deeper into trouble . . . and a little bit in love.
Buy Kindle Version
Buy Paperback Version 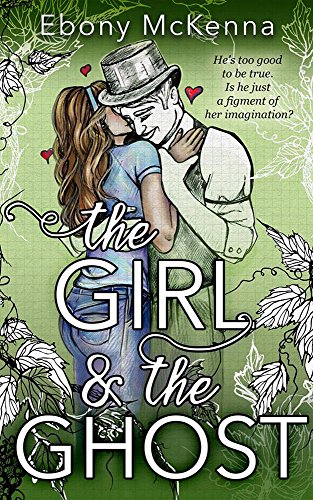 The Girl and The Ghost

Publicity-shy teenager Morgan Parker would love a day free from scandal, but her tabloid-fodder family can't help making idiots of themselves in public. So when a confused - and a little bit gorgeous - ghost by the name of George Sebastian Wallace shows up in her room, Morgan welcomes the distraction from the chaos of her real life. As Morgan gets to know George, she helps him unravel his family’s secrets. A research trip to the cemetery with George turns into a social media sensation as the paparazzi have a field day capturing Morgan apparently talking to herself. The rest of the world can't see George, only Morgan can. Suddenly social media can’t get enough of Morgan and her 'imaginary friend'. Now Morgan's the one creating gossip and she hasn't a clue how to stop it.
Buy Kindle Version
Buy Paperback Version 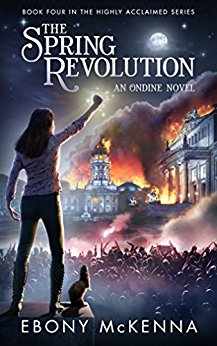 The fourth and final part of this captivating young adult series combines folklore, fantasy and romance, with quirky fun and dramatic adventure. Mutating magic is everywhere, with ‘normals’ now possessing superpowers. With a dark army gathering strength and the cunning Lord Vincent plotting to seize control of the country of Brugel, it’s up to Ondine and her beloved boyfriend Hamish to expose the truth. Chiffon and sequins collide during a pop song contest and last-chance debutante ball that distracts the population from impending danger. These events mask Vincent’s devious plan, which will change the fate of nations and see the spine-chilling return of an old nemesis. Amongst the turmoil Ondine discovers that Hamish has been hiding a disturbing secret, which could end their relationship forever. In her darkest hour, Ondine must put aside her selfish needs to lead the people of Brugel in a revolt against the tyrannical forces threatening her family - and democracy itself. As she fights to save those she loves, Ondine grapples with her identity and place in the world. Has she really got what it takes to be a witch… and can magic alone overcome adversity? Author Ebony McKenna will charm readers with her wit and spirited style in this explosive conclusion to the ONDINE series. In this climactic and emotional outing, fans will discover stunning revelations that unlock the hidden truths spread throughout the four-book saga.
Buy Kindle Version
Buy Paperback Version 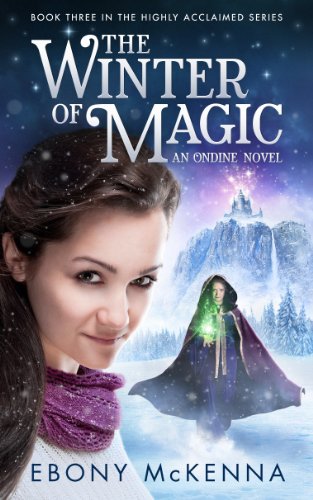 The Winter of Magic (Ondine Book #3)

This third enthralling instalment in the young adult fantasy romance series takes a dark turn, as the country of Brugel descends into anarchy. Mutating magic is spreading across Europe. 'Normals' are developing supernatural powers at a startling rate and 16-year-old Ondine appears to be at the heart of it. To unravel the mystery, Ondine and her boyfriend (and part-time ferret) Hamish infiltrate CovenCon, a gathering of hundreds of witches presided over by wanna-be-witch-queen Mrs Howser. There, she tempts Ondine with an intriguing offer - but can Mrs Howser be trusted? It transpires the powerful witch has her claws in the arrogant royal heir Lord Vincent, in a covert bid to control all of Brugel. As dark magic riots break out in the nation's capital, Ondine is left with a heart-breaking choice that could tear her apart from her beloved Hamish. Forever. The Winter of Magic is the third novel in Ebony McKenna's comedic and wonderfully weird four-part ONDINE series. Fans will devour this spellbinding adventure, which will have readers gasping in shock and laughing with delight. Occasionally at the same time.
Buy Kindle Version
Buy Paperback Version 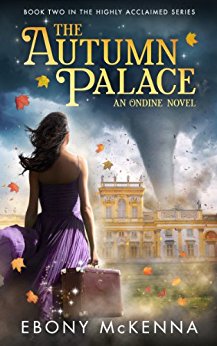 This second sassy adventure in the young adult series from author Ebony McKenna combines fairytale romance with magical fun. 15-year-old Ondine is desperate to escape the confines of her family’s hectic hotel to be with her gorgeous new boyfriend Hamish. When his talent for transforming into a ferret results in a dangerous new assignment from the Duke of Brugel - at his stunning autumn palace - Ondine seizes the opportunity to tag along. To her annoyance, Ondine’s Great-Aunt Col insists on joining them as chaperone. Making matters worse is the ageing witch’s embarrassing habit of performing the wrong kind of magic at the worst possible time. Upon entering the palace grounds they are confronted by a fierce tornado that awakens something dark and ominous. Unexplained phenomena begin intruding on everyday life at an alarming rate. Surrounded by strange magic, Ondine and Hamish must expose a royal conspiracy, champion the palace’s downtrodden servants and solve a baffling mystery. With so much at stake, will they ever find time to be together? The Autumn Palace is the second novel in the wonderfully witty four-part ONDINE series. Fans of The Princess Bride will love this book. (Fans of the first book will love it too, obviously!)
Buy Kindle Version
Buy Paperback Version 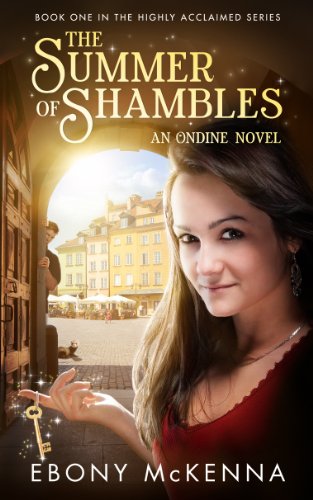 The Summer of Shambles (Ondine Book #1)

Dive into this wonderfully witty young adult series from author Ebony McKenna, set in the far off European country of Brugel. 15-year-old Ondine is struggling to fit in at Psychic Summercamp and doubts she possesses any of her family's magical abilities. She resolves to leave, determined to follow her own path and be a normal teenager. Whatever normal is in a place like Brugel. On the way home Ondine is shocked when her pet ferret Shambles starts talking - in a cheeky Scottish accent no less! He is in fact a young man trapped in a witch's curse. When he briefly transforms into his human self, Ondine is smitten. If only she can break the spell for good, Shambles can be handsomely human on a full-time basis. During the summer, these two misfits uncover a plot to assassinate a member of the royal family and discover a secret treasure that has remained hidden for decades. This attracts the attention of the arrogant Lord Vincent, and Ondine can't help being drawn in by his bad-boy charm. With so many demands on Ondine's attentions - and affections - normal has never seemed so far away. The Summer of Shambles is the first in the four-part ONDINE series. Fans of The Princess Bride or the Confessions of Georgia Nicolson series will love this delightfully quirky fairytale.
Buy Kindle Version
Buy Paperback Version
Scroll to top