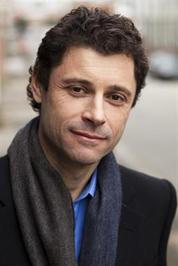 Elliot Perlman is an Australian author and barrister. He has written two novels and one short story collection. His work "condemns the economic rationalism that destroys the humanity of ordinary people when they are confronted with unemployment and poverty". This is not surprising in a writer who admires Raymond Carver and Graham Greene because they "write with quite a strong moral centre and a strong sense of compassion". However, he says that "Part of my task is to entertain readers. I don't want it to be propaganda at all. I don't think that for something to be political fiction it has to offer an alternative, I think just a social critique is enough". He describes himself, in fact, as being interested in "the essence of humanity" and argued that exploring this often means touching on political issues.
Perlman often uses music, and song lyrics, in his work to convey an idea or mood, or to give a sense of who a character is. However, he recognises that this "is a bit of a risk because the less familiar the reader is with the song, the smaller the pay off 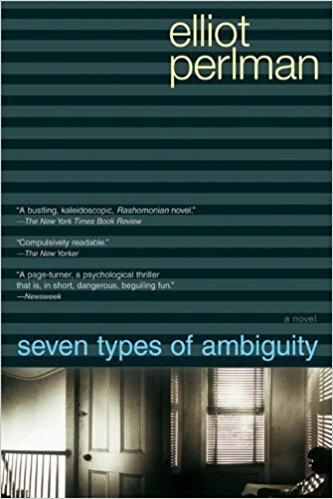 Seven Types of Ambiguity is a psychological thriller and a literary adventure of breathtaking scope. Celebrated as a novelist in the tradition of Jonathan Franzen and Philip Roth, Elliot Perlman writes of impulse and paralysis, empty marriages, lovers, gambling, and the stock market; of adult children and their parents; of poetry and prostitution, psychiatry and the law. Comic, poetic, and full of satiric insight, Seven Types of Ambiguity is, above all, a deeply romantic novel that speaks with unforgettable force about the redemptive power of love. The story is told in seven parts, by six different narrators, whose lives are entangled in unexpected ways. Following years of unrequited love, an out-of-work schoolteacher decides to take matters into his own hands, triggering a chain of events that neither he nor his psychiatrist could have anticipated. Brimming with emotional, intellectual, and moral dilemmas, this novel-reminiscent of the richest fiction of the nineteenth century in its labyrinthine complexity-unfolds at a rapid-fire pace to reveal the full extent to which these people have been affected by one another and by the insecure and uncertain times in which they live. Our times, now.
Buy Paperback Version
Buy Hardback Version
Scroll to top