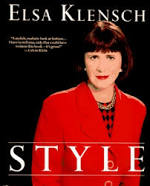 Elsa Klensch is an Australian-American journalist, author and television personality. She was born on 21 February 1933 in Cooranbong, in the Lake Macquarie District of New South Wales, to Johann Ernst and Mary Margaret (née Miles) Aeschbacher.

She is married to Charles Klensch, whom she met in Hong Kong while he was on leave from his post as Saigon news bureau manager for the American Broadcasting Company. They were married in 1966 in wartime Saigon and then settled in New York.

She has worked at the Sydney Telegraph, Australian Broadcasting Corporation, and the Public Information Office of the Territory of Papua and New Guinea. She edited the Hong Kong Trade Bulletin, Women's Wear Daily, and was senior fashion editor at Vogue, Harper's Bazaar, The New York Post and WCBS-TV.

She hosted and produced Style with Elsa Klensch, which ran from 1980 to 2000 on CNN. She has also authored four mystery novels. 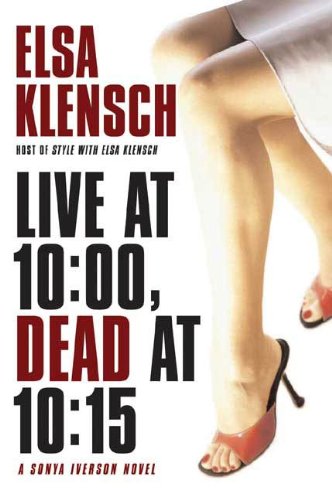 Elsa Klensch, former host of CNN's "Style with Elsa Klensch," has an insider's knowledge of the fashion industry's most flamboyant personalities coupled with an outsider's sharp-eyed objectivity. In Live at 10, Dead at 10:15, Klensch brilliantly evokes the worlds of fashion and design through the eyes of Sonya Iverson, ambitious Midwesterner striving to succeed in New York City. As a producer for the network newsmagazine "The Donna Fuller Show," Sonya is frustrated at always having to work on "fluff"-but she never expected her big break to come in the middle of the annual American Fashion Awards dinner. Sonya steps into the elegant powder room of New York City's 42nd Street Library to discover a just-out-of-rehab supermodel clutching what appears to be a bloody dagger and standing over the body of the glamorous wife of a fashion industry mogul. Sonya's first call is to the newsroom; the police come second. The dead woman, Harriett Franklin, was widely admired for her charitable work but nearly universally disliked, Sonya discovers as she interviews clothing designers, models, fashion magazine editors, and industry bigwigs. Harriett was scheming and manipulative, determined to have her way in everything from naming the new perfume being developed by the House of Franklin to keeping her Down Syndrome son in a treatment facility far from the spotlight. Suspects abound. Was the killer the supermodel, whose comeback Harriett was threatening to derail? The internationally-renowned designer recently fired at Harriett's bidding? The fashion magazine editor Harriett first bribed and then blackmailed? Or even Harriett's long-suffering husband, who may have finally had all he could take of his shrewish wife? Eager to break this career-making story, Sonya quickly learns many dark secrets about the seamy underside of the fashion industry. Sonya's next interview might be her last . . . . At the Publisher's request, this title is being sold without Digital Rights Management Software (DRM) applied.
Buy Kindle Version
Buy Hardback Version
Scroll to top