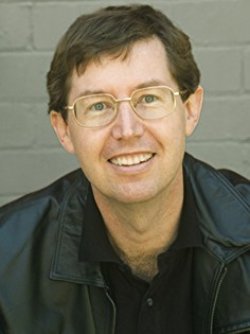 Gary Corby has long been fascinated by ancient history, finding it more exciting and bizarre than any modern thriller. He’s combined the ancient world with his love of whodunits, to create an historical mystery series set in classical Greece. Gary lives in Sydney, Australia, with his wife and two daughters. He blogs at A Dead Man Fell from the Sky, on all things ancient, Athenian, and mysterious. More information is at GaryCorby.com. 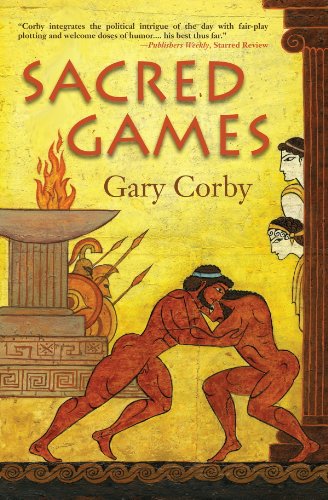 The third book in the critically acclaimed series set in Classical Athens, featuring the historically-inspired amateur detective Nicolaos. It is the Olympics of 460 BC. Nico's best friend, Timodemus, is a competitor in the pankration, the deadly martial art of ancient Greece. Timo is hot favorite to win. His only serious rival is Parmonos from Sparta. When Parmonos is found beaten to death, it is obvious Timodemus must be the killer. Who else could have killed the second-best fighter in all Hellas but the very best? The Judges of the Games sentence Timodemus to be executed in four days' time, as soon as the Sacred Games have finished. Complicating everything is the fact that Athens and Sparta are already at each other's throats, in the opening stages of a power struggle for control of Hellas. If an Athenian is found to have cheated at the Games by murdering a Spartan, it will be everything the hawks in Sparta need to declare open war the moment the Sacred Truce is over. And that's a war Athens cannot hope to win. Nico and his partner in sleuthing, the annoyingly clever priestess Diotima, have four days to save their friend and avert a war that would tear their world apart.
Buy Kindle Version
Buy Paperback Version 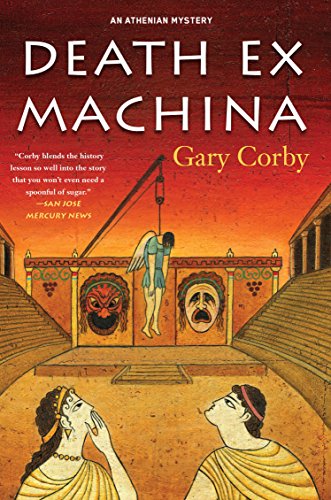 A theatrical murder sends classical Athens into an uproar Athens, 459 BC: It’s the time of the Great Dionysia, the largest arts festival of the ancient world, held each year in honor of Dionysos, the god of wine. But there’s a problem: A ghost is haunting Athens’s grand theater. Nicolaos and the priestess Diotima, his clever partner in sleuthing (and now in matrimony), are hired to exorcise the ghost, but secretly suspect that a human saboteur is operating behind the scenes. Then one of the actors is found hanged from the machine used to carry actors through the air when they play the part of gods. It’s quite a theatrical murder. As Nico and Diotima dig into the actor’s past, they discover enough suspects to fill a theater. As the festival approaches and pressure mounts on all sides, can they hunt down the killer in time? Or will they simply have to hope for a deus ex machina?
Buy Kindle Version
Buy Hardback Version 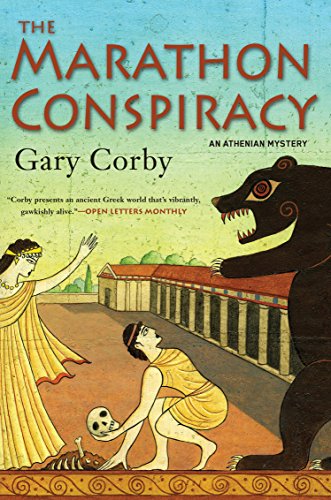 The rollicking fourth book in the Nicolaos and Diotima mystery series set in Classical Athens. Nicolaos, Classical Athens’s favorite sleuth, and his partner in investigation, the clever priestess Diotima, have taken time off to come home and get married. But hoping to get hitched without a hitch proves overly optimistic: A skull discovered in a cave near the Sanctuary of Artemis, the ancient world’s most famous school for girls, is revealed to be the remains of the Hippias, the reviled last tyrant to rule Athens. The Athenians fought the Battle of Marathon to keep this man out of power; he was supposed to have died thirty years ago, in faraway Persia. What are his remains doing outside the city walls? Nico’s boss, the great Athenian statesman Pericles, wants answers, and he orders Nico to find them. Worst of all, one of the two Sanctuary students who discovered the skull has been killed, and the other is missing. Can the sleuths solve the interlocked crimes before their wedding?
Buy Kindle Version
Buy Hardback Version 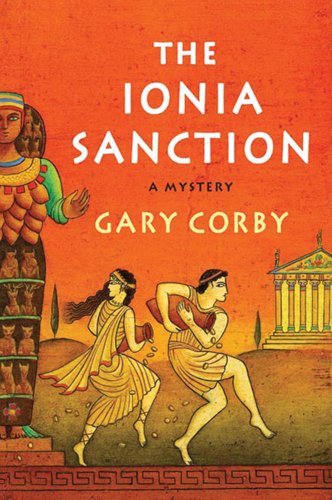 "Corby has not only made Greek history accessible—he's made it first-rate entertainment." --Kelli Stanley, award-winning author of Nox Dormienda and City of Dragons Athens, 460 B.C. Life's tough for Nicolaos, the only investigating agent in ancient Athens. His girlfriend's left him and his boss wants to fire him. But when an Athenian official is murdered, the brilliant statesman Pericles has no choice but to put Nico on the job. The case takes Nico, in the company of a beautiful slave girl, to the land of Ionia within the Persian Empire. The Persians will execute him on the spot if they think he's a spy. Beyond that, there are only a few minor problems: He's being chased by brigands who are only waiting for the right price before they kill him. Somehow he has to placate his girlfriend, who is very angry about that slave girl. He must meet Themistocles, the military genius who saved Greece during the Persian Wars, and then defected to the hated enemy. And to solve the crime, Nico must uncover a secret that could not only destroy Athens, but will force him to choose between love, and ambition, and his own life.
Buy Kindle Version
Buy Paperback Version
Buy Hardback Version 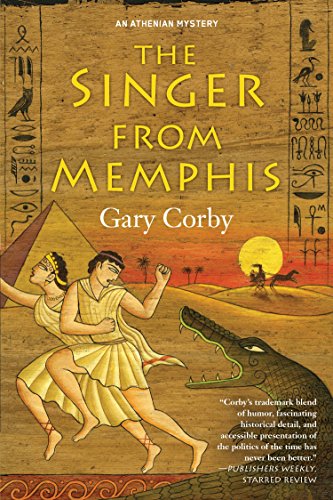 The Singer from Memphis (An Athenian Mystery)

A historical murder mystery adventure that stretches from Classical Athens to Egypt in the footsteps of the first historian, Herodotus Nicolaos, the only private investigator in Athens, discovers that helping a writer with his book research can be very dangerous. Would-be author Herodotus has hired Nico and his priestess wife, Diotima, to accompany him to Egypt to research that ancient country’s history. Unfortunately, Egypt happens to be in the throes of a rebellion against its overlords, the Persian Empire. Pirates infest the sea route. Three different armies roam the Egyptian countryside. The river is full of crocodiles. Everywhere Nico turns, there’s a secret agent ready to kill him, and possibly worse, he can’t find a decent cup of wine anywhere. A simple historical investigation turns into a dangerous adventure of international espionage.
Buy Kindle Version
Buy Hardback Version 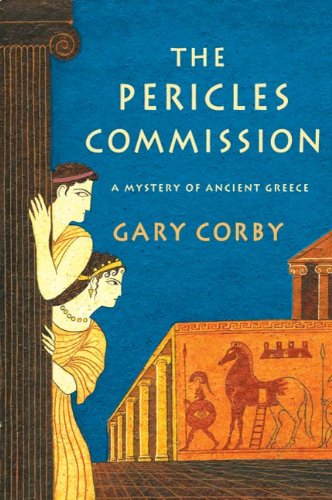 Nicolaos walks the mean streets of Classical Athens as an agent for the promising young politician Pericles. His mission is to find the assassin of the statesman Ephialtes, the man who brought democracy to Athens and whose murder has thrown the city into uproar. It's a job not made any easier by the depressingly increasing number of dead witnesses. But murder and mayhem don't bother Nico; what's really on his mind is how to get closer (much closer) to Diotima, the intelligent and annoyingly virgin priestess of Artemis, and how to shake off his irritating twelve year-old brother Socrates. The Pericles Commission is the first in an exciting new series by first-time novelist Gary Corby, who takes us to Ancient Greece at one of the most exciting times in history. In this wonderfully approachable, historically rich novel, Athens is brought vividly to life in a mystery engaging from the first page to last.
Buy Kindle Version
Buy Paperback Version 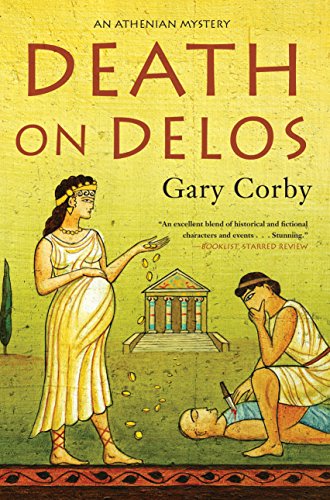 Death on Delos (An Athenian Mystery)

​In the seventh in Gary Corby's Athenian Mystery series, Nico and Diotima must solve a murder case while also preparing to have a baby. Set on the sacred island of Delos in 5th century BC, Death on Delos is full of humor and historical intrigue. ​ Greece, 454 BC: The sacred isle of Delos, the birthplace of the divine twins Apollo and Artemis, has been a most holy pilgrimage site for centuries. Delos is also home to the military fund kept by the Delian League, the alliance of city-states that defended Greece against the Persians, and that vast treasury is protected only by the priests and priestesses of the tiny isle and a scant armed guard. Then one day the charismatic Athenian statesman Pericles arrives at the head of a small army to forcibly take the treasury back to the safety of Athens. With him are Nico, the only private agent in ancient Athens, and his heavily pregnant wife and partner in sleuthing, the priestess Diotima. She has been selected to give this year’s annual offering to holy Artemis. In the face of righteous resistance from the priests, Pericles assigns Nico to bribe their leader. But before he can get very far with this dubiously unholy task, Nico ends up with a murder on his hands. It is a crime against the gods to die or be born on the sacred island. Thanks to the violence over the treasury, the first blasphemy has already been committed. Can Nico solve the murder and get Diotima off the island before they accidentally commit the second?
Buy Kindle Version
Buy Hardback Version
Scroll to top