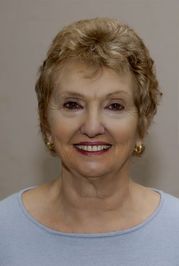 Goldie was born in Melbourne just before the 2nd World War. Her parents had migrated from Poland in the late 1920's, and when she was small, she hardly spoke any English. Her earliest memories are of a time when young children were allowed to wander the streets without anyone worrying too much about them getting into trouble.

Her first four Young Adult books were 'Dolly Fiction' novels published under the pseudonym of Gerri Lapin. Her first book under her own name, "Mavis Road Medley" is a time travel fiction exploring the world of Princes Hill and her parents' struggles to survive the Depression. Since then Goldie has written more than 80 books, and many prize winning short stories and articles.

She known for her historical, science fiction and mystery novels, plus her short stories and non fiction such as Mentoring Your Memoir.

When Goldie isn't writing and revising, she enjoys spending time with her family and friends, reading, watching movies and DVD's, knitting and walking. She says these are her ways of coming up with ideas.

'My Australian Story: Surviving Sydney Cove' is now in its 10th edition. 'Mavis Road Medley' (Margaret Hamilton Books 1991) was chosen by the Victorian Australian Centre for Youth Literature as one of their 150 'treasures'.

Some of her latest books include 3 collections of short stories for young readers, Killer Virus, Horrible Cousins, and Space Footy. Her crime stories for children is the series A~PI: Hedgeburners and Car-Crimes. Her latest historical fiction for young readers is 'The Youngest Camelleer' 'Gallipoli Medals'.

Just out are the YA 'Dessi's Romance' and 'That Stranger Next Door.
For middle grade readers: "eSIde, a Journey into Cyberspace", "Neptunia" and for Junior readers "Gallipoli Medals"
For adults a paranormal romance "Penelope's Ghost"
Latest YA verse novel is 'In Hades' and the middle grade 'My Holocaust Story: Hanna" 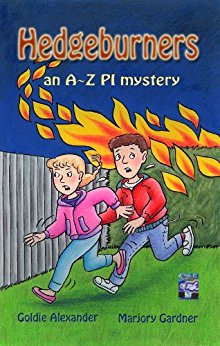 Who is setting fire to the old cypress hedges? Anna Simpson insists that her best friend Zach Santisi help her find the culprits. However, Zach must also care for his numerous pets and cope with his dad threatening to sell them if his next report card isn’t better. Just about everyone these young detectives come across has a motive and as time goes on there are more and more fires and more serious confrontations... Based on actual crimes committed by youngsters, this is the first of a series featuring Anna and Zach, Private Eyes (A~Z PIs).
Buy Kindle Version
Buy Paperback Version 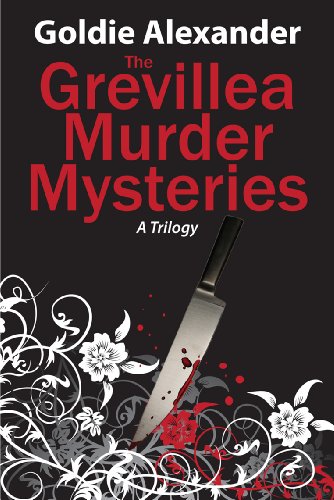 The Grevillea Murder Mysteries - A Trilogy

Book One: Not Just Desserts, the deli and catering firm owned by Olivia Beauman, is under threat. Though many people hate Harry Oldritch, it is his long suffering wife Queenie, and his mistress Bettina who die after old fashioned pesticide is placed into meals Olivia has prepared. To any outsider, Grevillea might seem a typical sleepy coastal village. But when DI Richard Brumby is brought in to help solve these crimes, he discovers that no place, no matter how idyllic, is safe from secrets and intrigue. Book Two: UnKind Cut, as a long dry summer comes to an end, the Grevilleans are trying to raise money for their fire-station by staging a production of Julius Caesar. Kingston Ellis, that celebrated Shakespearean actor, has offered to play the title role. Opening night is on the 15th March. However when Kingston is stabbed for real in the assassination scene, Olivia Beauman of Not Just Desserts, Eddie her partner and the play’s director, plus close friends Carmela and Janette, are inevitably drawn into helping DI Richard Brumby solve this crime. Book Three: UnFair Coverup, a body has been fed through a Shire shredding machine. Another is found in the local tip. DI Richard Brumby and his new 21C, Kian Kaminsky, set about finding the bodies’ identity. The third of this series, Olivia Beauman of Not Just Desserts, Eddie her partner and local school principal, and close friends Carmela and Janette, are inevitably drawn into helping DI Richard Brumby solve this crime as meanwhile Richard tries to keep his marriage intact. Included are some of Olivia’s more easy to prepare recipes About the Author: Goldie Alexander is a versatile author who writes novels and non-fiction for adults and children, plus many prizewinning stories. Her latest fiction for young readers includes “Hedgeburners: An A-Z PI Mystery”, “The Youngest Cameleer” , the 5 part fantasy “eSide”, a 3rd collection of short stories, “Space Footy and Other Stories”. And for adults the ‘how-to’ “Mentoring Your Memoir”, and “The Grevillea Murder Mysteries” trilogy. UNJUST DESSERTS reviewed by SALLY ODGERS. Unjust Desserts is a crime story with a difference, set in the Australian coastal-village of Grevillia. Style and atmosphere are immediately and affectionately familiar to anyone who has ever lived in a small town. The characters are believable, from doughty heroine Olivia to sad Queenie and her repulsive husband Harry. The story-line revolves around Olivia Beaumont’s efforts to keep her café/deli, Not Just Desserts, afloat. Even before one of her clients dies after eating one of Olivia s curries, there is trouble in the air. Harry Oldrich is determined to become Olivia’s sleeping partner and she’s just as determined that he won’t! A possible development has the townsfolk at loggerheads, and the arrival of an attractive young Australian Chinese teacher named Eddie Wong ruffles quite a few of the more hidebound feathers in the village. Add Detective Richard Brumby as the investigating officer, Olivia s dysfunctional family, a spot of middle aged sex and some cooking, and you have all the ingredients for a home grown puzzle to suit the most jaded palate. Along the way, Goldie Alexander makes a few sly thrusts at attitudes and suppositions that are sure to have some readers nodding in rueful recognition of their own, or their neighbours, quirks. The production values of this novel are excellent. The type is clear and easy to read, the editing and proofing well done, and the book is sturdy without any tendency to close while I was still reading!
Buy Kindle Version
Scroll to top