John Bryson achieved international acclaim with Evil Angels, his celebrated book on the disappearance of Azaria Chamberlain. It was also released as a major film starring Meryl Streep and Sam Neill. Hodder Headline Australia released a new edition of Evil Angels in 2000.

When John followed the Azaria Chamberlain case through the early eighties, the moment of greatest shock for him came at the conclusion of the trial. Weeks of detailed evidence from the Defence had conclusively demonstrated the profound errors of procedure that the police forensic scientists had committed. However, the jury utterly ignored the facts, and found Lindy Chamberlain guilty of murdering her baby. It was this triumph of prejudice over truth, so nakedly revealed in the jurys decision, that spurred John on to write the book Evil Angels. It became a turning point in public opinion. Not merely exposing the flaws in the conviction, it above all demonstrated that despite Australians' belief in their sense of fairness, prejudice can overwhelm us.

John lectures in law, literary journalism, and fiction, acts on advisory panels to government, NGOs, and universities, and on literary judging panels. At the end of the millennium, a Schools of Journalism panel included him in ‘The 100 Journalists of the Century'.

In 2014 he was appointed Member of the Order of Australia for services to literature and to indigenous youth. 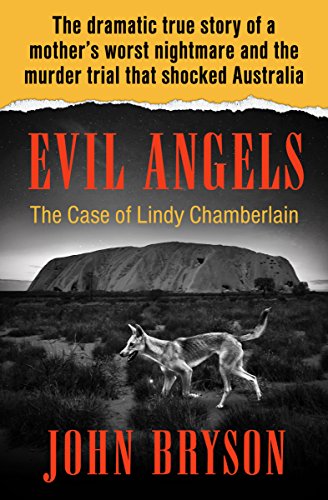 The basis for the Meryl Streep film A Cry in the Dark: The dramatic true story of a mother’s worst nightmare and the murder trial that shocked Australia. On a camping trip at Ayer’s Rock, the Chamberlain family’s infant daughter disappeared in the middle of the night. Her distraught mother, Lindy, claimed she saw a dingo carry her off into the Australian outback. Two years later, their tragedy worsened when, without a murder weapon, a body, or even a motive, a jury convicted Lindy Chamberlain of killing her own daughter. The public cheered. John Bryson, a trial lawyer and award-winning journalist, deconstructs the factors that led to a seemingly reasonless incarceration and the public attitude that demanded it. With this book, he began to sway popular opinion in the Chamberlains’ favor by discussing the failures on the part of the police, forensics team, and press. Winner of the CWA Gold Dagger and the inspiration for the film A Cry in the Dark starring Meryl Streep, Evil Angels presents an impartial analysis of the most notorious miscarriage of justice in Australian history. It serves as a reminder of the dangers of blindly searching for a conviction, the importance of scientific accuracy, the volatility of the media, and the ease with which a nation can fall prey to bigoted thinking. Written with literary finesse, this is one of the twentieth century’s most important—and thoughtful—works of true crime.
Buy Kindle Version
Buy Paperback Version
Buy Hardback Version
Scroll to top