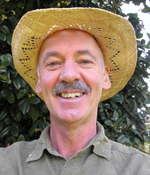 Justin D’Ath is the author of about 50 books for children and young adults, including the hugely popular Extreme Adventures, translated into 6 languages and adapted for TV. Other books include the Lost World Circus and Mission Fox series. Justin’s latest book is Cooper.

Justin's contemporary fantasy novel, Pool, was shortlisted in the 2008 Victorian Premier's Awards and was a CBC Notable Book in 2008. Several of his books have been shortlisted in the YABBA, KOALA and BILBY Awards, and his picture book Dinosaur Dreaming (illustrated by Mike Spoor) won the Picture Book of the Year, selected by children, in the 2012 Big Read Competition.

One of twelve children, Justin grew up on a farm in Otaki, New Zealand. He wrote his first book, a ten page cartoon about his pet turtle, Bubble, when he was nine years old. His next cartoon was about Moriarty, his guinea pig, and filled a complete exercise book. When he was eleven, Justin began writing his first novel, but conked out after 35 pages.

Justin has always been a story teller. When he was a boy, he and his brothers Billy and Philip made up stories to tell each other after they went to bed at night. Justin continued this tradition when he had children of his own, reading them stories at bedtime, or making up tales featuring his daughter and son, Fiona and Tim, as the heroes.

Justin’s first publication was a monthly cartoon strip in a magazine, which he used to draw in his tent while he travelled around Australia on a motorbike. His first book, a novel for adults called The Initiate, was published in 1989 and won three awards. His adult short stories have been published in 18 countries and have won 54 literary prizes.

For twenty years Justin wrote only for adults - in addition to his other jobs: driving forklifts, building cars, picking fruit, mustering cattle, mining for iron, working in a laboratory, being a club manager in an Aborigine settlement, working in a sugar mill and teaching Professional Writing at TAFE.

It was his daughter, Fiona, who introduced him to contemporary children’s books. Despite his writing background, it took Justin another ten years to try his hand at it.

Of his many books for children, Justin says ‘I laugh aloud at the unexpected things my characters say and do. I don’t plan. I simply invent a character, usually between ten and fourteen years old, put her or him in an unusual (or scary!) situation, and start speaking in her, or his, voice. For me it’s a natural process. Part of me doesn’t seem to have grown up!’

And of his audience, Justin says: ‘My main message is, Enjoy reading. I want children to become lost in my books; to experience the magic of the written word; to see that reading is not a chore, it’s one of the most exciting, imaginative and enjoyable things they can do.’ 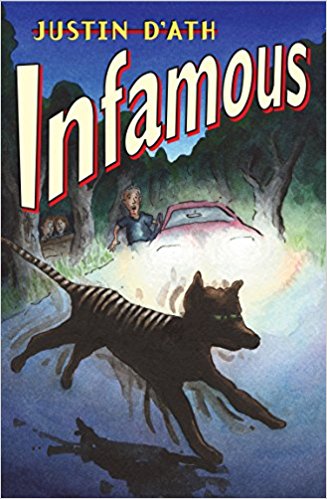 As we inched our way forwards, I had a sudden picture in my mind of an enormous mouth with pointed white teeth exploding out of the darkness like a raptor in Jurassic Park. I just about lost my nerve then. I asked myself, Why are we doing this? There wasn't really an answer, at least not one that made sense...' When Tim and his dog Elvis launch Operation Thylacine, trouble is just around the corner. It looks as though Tasmanian tigers are not extinct, after all, and Tim and Elvis have to pull off a really difficult and dangerous trick. Soon Elvis is famous, and Tim...well he's infamous!
Buy Paperback Version
Scroll to top