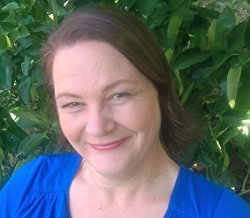 Kiss Carson has always loved stories that whisk her away from the real world and dump her right in the middle of a once in a lifetime adventure. Danger and love always seem to go hand in hand, along with a little bit of fantasy or paranormal. She lives in Queensland, Australia, with her husband, three children, granddaughter, 2 grandsons, 2-3 cats depending on the day and a feisty cockatiel called Charlie. 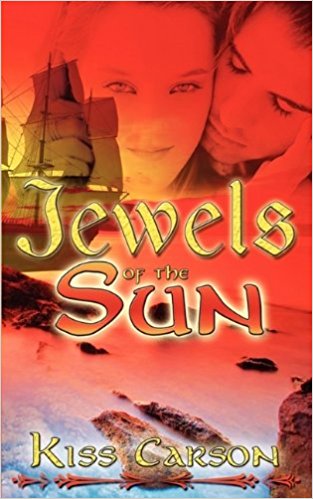 Jewels of the Sun

Born on the mysterious island of Ambrosia and whisked away to mainland Australia when only a few days old, Selena Lewis grows up hearing tales of unimaginable treasures and a floating island, trapped in the nineteenth century, which only appears every 25 years. Now, the island has returned and Selena is determined to prove to the treasure hunting community that the island exists, as does the treasure. Kidnapped and blindfolded, she's held hostage by virile pirate captain, Saxon Ambrose, who piques her curiosity both sexually and emotionally. Drawn into the very depths of Ambrosia, Selena finds the Jewels of the Sun, the diamond pillars that allow the island to survive, and the treasure she's waited all her life to find. However, the Jewels are dying, and so is Ambrosia. Her love for Saxon is the key but is it stronger than her struggle for treasure hunting fame? In the end, will love conquer all?
Buy Paperback Version 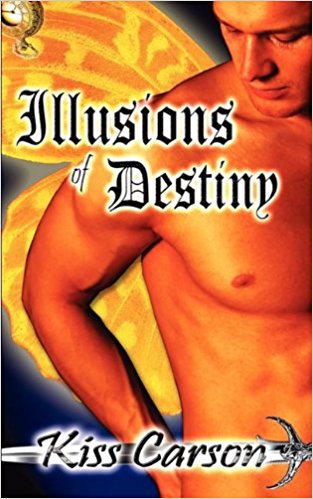 When Ianna Ward receives a mysterious parcel, she thinks someone is playing a trick on her. However, the contents of the 16th century chest transports her back in time to a different dimension where the sidhe, a mystical race of people, war with humans. She meets the mysterious and appealing Regan Shay, the sidhe leader and her attraction to him is as powerful as his hypnotic gaze and devastating grin. But someone else has laid claim to Regan and will stop at nothing to keep him within her cruel grasp. With the help of unicorns, dragons and a cheeky Pegasus called Mercury, Ianna fights for love - is she strong enough to battle destiny and change her life forever?
Buy Paperback Version 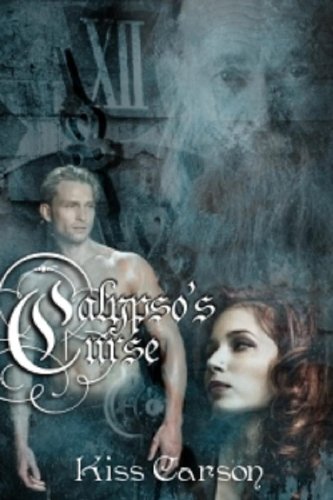 Cursed by a jealous goddess 200 years ago, Israel Alexander is doomed to wander the earth in search of his brothers. To live a normal life he must find a woman named after the daughter of a titan, and kill her. As far as men go, Israel Alexander is one fine specimen. With rugged features, sparkling eyes, and a smile that can light a small city, his appeal is hard to resist. So, why does Calypso James have murder on her mind every time she looks at him? In a cat and mouse game through time, Calypso and Israel find they share more than deadly intentions. Is love enough to break a curse built from the foundations of mythology? Or will someone make the ultimate sacrifice?
Buy Kindle Version 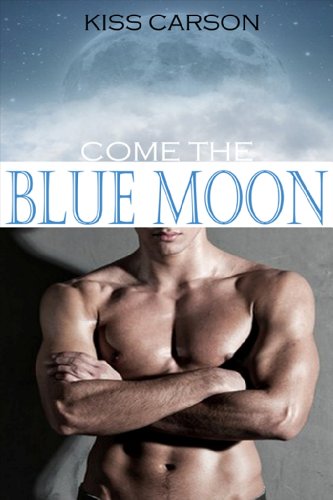 After the sudden death of her father, Hunter Hartley visits an old Victorian manor nestled in the hills of the Sunshine Coast Hinterland, the last place anyone saw her father alive. There, she meets Caleb Scott, the enigmatic owner of the house. Passionate and desirable, he is like a magnet, drawing her in until she can’t deny her attraction. However, Caleb harbors a dark secret, one she may never forgive. Living a life shrouded in darkness, Hunter enters a world where curses are real, and fear runs deep. Will her love for Caleb save them both from his inner demon, or will her father’s killer remain out of reach forever?
Buy Kindle Version 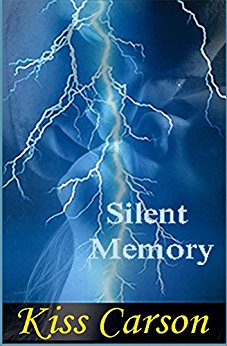 Fortune Storm is a murderer, but she can’t remember whom she murdered. In fact, she can’t remember much at all. When she wakes one morning in the care of the handsome Phoenix Storm, her heart believes she knows him but the only emotion she feels is fear. As time moves on Fortune’s memories reveal a passionate liaison, and a marriage she would rather forget. But her mind is weak, her memories confused. Which man loves her, and which man is the monster? Only when she dispels the ghosts in her heart will the truth be revealed and her life changed forever.
Buy Kindle Version
Buy Paperback Version 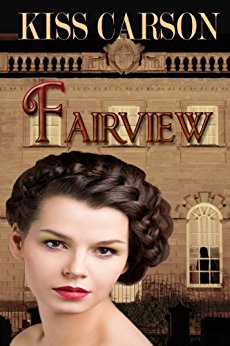 The idea of a murder mystery party is simple. Someone pretends to die. The guests solve the murder. Simple. But when Marina Cornell is invited to Fairview House by her brother, solving the murder becomes a lot harder than she expected, especially because she is so easily distracted by Jackson Bradley, the gorgeous owner of the estate. Cast as the nanny to watch over Jackson’s younger sisters, Marina is told blood-chilling stories of suspected murder and abandoned children, and it becomes quickly apparent that something isn’t right about the Bradley family. Or the house. One by one, the Bradley siblings are found dead and Marina finds her perception of real and make-believe distorted. Someone really is killing Jackson’s family, but the murderer is the one person she never expects and in the end, she must rely on more than love to save her life.
Buy Kindle Version
Buy Paperback Version 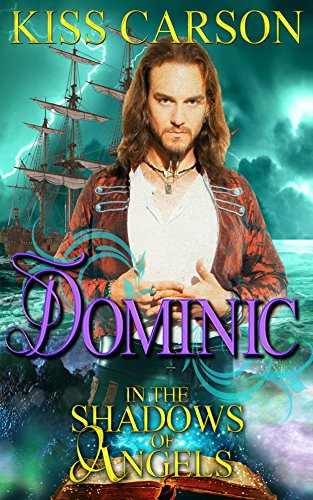 Dominic (In the Shadows of Angels Book 2)

Marry the witch, Dominic, for the sake of your brothers. Love her, even though you do not. Dominic Lamont’s father’s words haunt him, and the man’s expression plagues him incessantly. However, he cannot love the witch who violently kidnapped three of his brothers. Instead, he boards his beloved frigate, Ban-dia, and plans to rescue his brothers himself. Pursued by his cousin, an officer of His Majesty’s Royal Navy, and the vile witch, Charlotte, he sails the Caribbean in search of his brothers. When he discovers a beautiful, dark haired woman atop the treacherous Poseidon’s Finger, he is drawn to her innocent sense of adventure, and his heart takes an unexpected leap. Aged care nurse, Keziah Mitchell, dreams of living in the past. She also dreams of true love, a rare commodity in her grey, plastic world of 2070. Gifted a magical book by one of her charges, she is drawn into its enchanted pages and sent back in time to the year 1770. There, she finds herself on board Ban-dia with pirate captain, Dominic Lamont, and falls in love with his radiant grin and roguish ways. Living a life of mischief and pleasure, Keziah becomes the Pirate Princess, but the secrets she keeps soon draws suspicion, and the interest of dangerous admirers. The journey to love and happiness follows turbulent seas, and when Dominic is dragged into the damning world of witchcraft, Keziah must destroy her own demons to free him, and his brothers, with the one ability he detests.
Buy Kindle Version 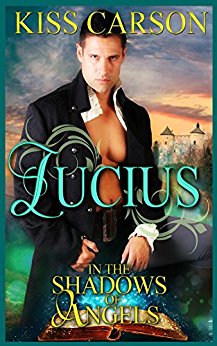 Lucius (In the Shadows of Angels Book 1)

Caught within the horror that has become his life, Lucius Benedict waits patiently for his savior to come, preferably an angel who can ease his heart and release him from his cursed existence. When the sudden appearance of a russet haired beauty postpones his execution, Lucius can not quite believe his luck. However he will not waste his freedom, and makes plans to prove his estranged wife died by the hand of another. Ella Jeffries is drawn into the pages of a mysterious book and transported back in time. The year is 1709, and the place is Aingealag Estate, tucked away in the thick haar of the Scottish Highlands. There, she rescues Lucius "Luke" Benedict, the Laird of Aingealag from the executioner's gibbet and falls under the spell of his dark gaze and sensual aura. However, Luke hides secrets behind his handsome facade and the more she loves him, the more she learns of the ancient curse that shadows the castle and all those who dare live within her walls. Can Ella save the Benedict Family or will Aingealag's shadows swallow them all whole?
Buy Kindle Version
Scroll to top