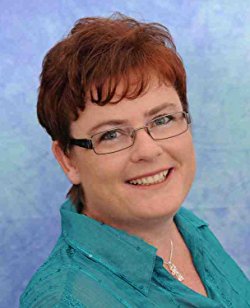 Kylie Griffin's addiction to all things paranormal started at an early age when she imagined the jacaranda tree in her front yard was a spaceship or castle tower used to defend the world from hordes of invading enemies. Writing stories seemed like a natural extension.
Today, she’s a primary school teacher sharing her love for the written word with young children. In her spare time, she writes and reads all things paranormal. 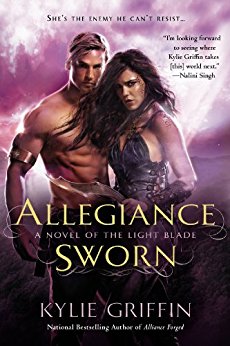 Allegiance Sworn (A Novel of the Light Blade)

There is no mercy in the demon realm. No escape. In this place of desperation and conflict, anyone who is not purebred is virtually powerless. Until a demon leader seeks to unify the races… With the alliance of the humans and the half-blood Na’Chi forged, the demon Na’Reish prepare for war by seizing human blood-slaves. Captured during a rescue mission-gone-wrong, Light Blade warrior Arek Barial finds himself claimed by a Na’Reishi female who offers him an unexpected choice. Raised in the elite ranks of a society she abhors, Imhara Kaal lives a dangerous double life as a Na’Reish Clan-leader and an advocate for a caste-free life that honors the Old Ways. Openly rebelling against the Na’Reish would mean her death, unless she can find an emissary willing to present her petition to the human Blade council. But Arek isn’t about to blindly follow a demon—despite the intense attraction growing between them. And while hatred for the Na’Reish is all he has ever known, Arek must learn to trust Imhara, or risk the destruction of all three races…
Buy Kindle Version
Buy Paperback Version 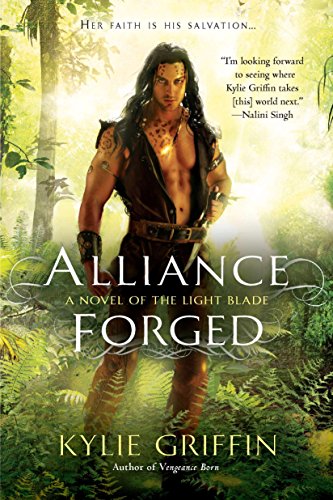 Alliance Forged (A Novel of the Light Blade)

There is no mercy in the demon realm. No escape. In this place of desperation and conflict, anyone who is not purebred is virtually powerless. Until a blind priestess lays claim to a half-breed warrior, body and soul… Hunted and marked for death by Na’Reish demons for their half-blood heritage, the Na’Chi are searching for a new home—something an alliance offered by the human leader could provide. With both races divided by prejudice, when Light Blade rebels brutally attack the Na’Chi, the alliance seems doomed to fail. Varian, leader of the Na’Chi, a hybrid race of gifted warriors, is cursed with the darker impulses of his demon heritage. Controlling the part of himself that craves the high of the battle is a struggle he’s afraid he’ll lose—until he meets Kymora Tayn, a priestess driven to serve her deity. While he’s unwilling to trust anyone outside his people, he finds himself drawn to Kymora’s strength and passionate nature, and discovers she has the power to calm the darkness inside him. When the Na’Reish raid human territory for blood-slaves and kickstart the war, the key to the survival of both races—Na’Chi and human—is an alliance. However when Kymora is kidnapped, pitting human against human, Varian realizes he must embrace his darker half, not only to save the alliance…but also the woman he loves.
Buy Kindle Version
Buy Paperback Version 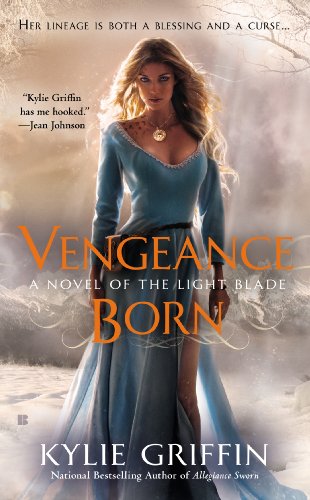 Vengeance Born (A Novel of the Light Blade)

There is no mercy in the demon realm. No escape. In this place of desperation and conflict, anyone who is not purebred is virtually powerless. Until an unlikely champion is born… Annika, half-blood daughter of the Na’Reish leader, longs for more than her tormented life among her father’s people. Conceived in hatred and bred as a tool of retribution, she’s gifted with a special talent that can heal as well as destroy… Kalan is a Light Blade warrior who knows the future of humankind depends on him alone. Incursions into human territory and raids for blood-slaves by the Na’Reish horde have increased. As Chosen, leader of his people, he faces the task of stopping the demons. When Annika learns Kalan is a prisoner in her father’s dungeon, she agrees to free him in exchange for his protection. Now, marked for death for helping him, Annika must learn to trust Kalan as they journey to the border and discover a shocking truth that could throw the human race into a civil war…
Buy Kindle Version
Buy Paperback Version
Scroll to top