I was born in Nottingham in 1970, departing from a snow-covered city in 1975 directly to Kambalda, a town on the edge of Australia’s largest desert. In November.The resultant culture shock is probably to blame for a lot of things, note least the feeling that I have never really belonged anywhere, and the strange twitch I get in my left eye whenever I see pebble gravel.

I’ve taught at Clarion South and developed and delivered a six-week Writing the SF Short Story course for the Australian Writers Marketplace. My work has been praised for its consistent attention to voice and narrative muscle, and has resulted in a number of awards including the Aurealis, Australia Shadows, White Raven and Australian SF ‘Ditmar’ gongs. My third novel, Magrit, was shortlisted for the 2017 NSW Premier’s prize.

I live with my wife, writer Lyn Battersby and an increasingly weird mob of kids. I am sadly obsessed with Lego, Nottingham Forest football club, dinosaurs and Daleks. I’ve been a stand-up comic, tennis coach, cartoonist, poet, and Arts & Culture coordinator for a local Council in previous times. 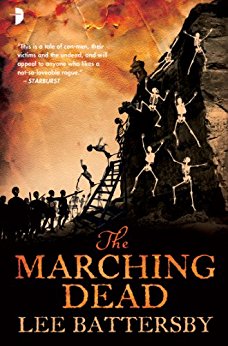 The sequel to The Corpse-Rat King. Find the dead a King, save himself, win the love of his life, live happily ever after. No wonder Marius dos Helles is bored. But now Keth, his one love, is missing. Gerd has re-entered his life, and something has stopped the dead from, well, dying. It’s up to Marius, Gerd, and Gerd’s not-dead-enough Granny to journey across the continent and put the dead back in the afterlife where they belong. But someone has the dead riled up and spoiling for a fight, and now the dead are marching… File Under: Fantasy [ Dead Not Buried | Relatively Insane | Marching Orders | No Rest ]
Buy Kindle Version
Buy Paperback Version
Scroll to top