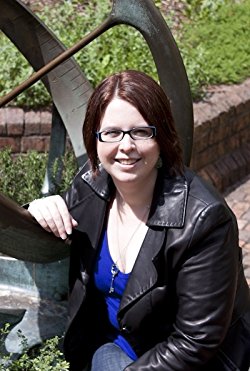 M.J Scott is a RITA® Award nominated author of fantasy and urban fantasy. She is an unrepentant bookworm. Luckily she grew up in a family that fed her a properly varied diet of books and these days is surrounded by people who are understanding of her story addiction.
When not wrestling one of her own stories to the ground, she can generally be found reading someone else's. Her other distractions include yarn, cat butlering, dark chocolate and fabric. 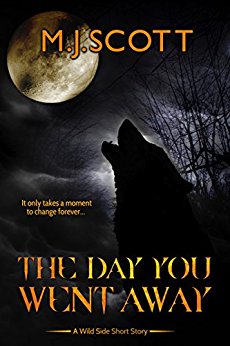 The Day You Went Away: A Wild Side Short Story

Ashley Keenan thought she'd found the one in Daniel Gibson. That they were going to be together for a lifetime. But it only takes a moment to change forever. The Day You Went Away is a short story prequel to The Wolf Within, the first book in my urban fantasy series, The Wild Side. It's short (about 8k). It's the story of what happened in the first stage of the romance between the hero and heroine of The Wolf Within before that book starts. While Ash and Dan have some ups and downs in this story (that's what happens when one of a couple becomes a werewolf), I promise they'll get their happily ever after in the end! A dark and sexy urban fantasy trilogy from M.J. Scott, RITA® Award nominated author of The Shattered Court and the Half-Light City series.
Buy Kindle Version 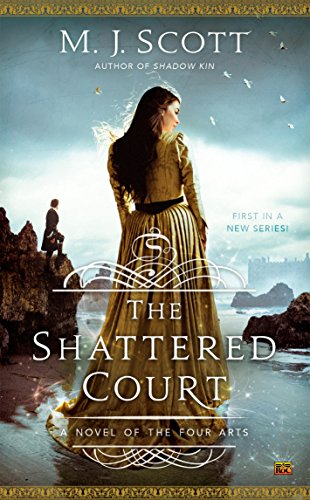 The Shattered Court: A Novel of the Four Arts

The royal witches of Anglion have bowed to tradition for centuries. If a woman of royal blood manifests powers, she is immediately bound by rites of marriage. She will serve her lord by practicing the tamer magics of the earth—ensuring good harvests and predicting the weather. Any magic more dangerous is forbidden. Lady Sophia Kendall, thirty-second in line to the throne, is only days away from finding out if she will be blessed—or perhaps cursed—with magic. When a vicious attack by Anglion’s ancient enemies leaves the kingdom in chaos, Sophia is forced to flee the court. Her protector by happenstance is Lieutenant Cameron Mackenzie, a member of the royal guard, raised all his life to be fiercely loyal to the Crown. Then Sophia’s powers manifest stronger than she ever imagined they would, and Cameron and she are inextricably linked in the process. As a witch unbound by marriage rites, Sophia is not only a threat to the established order of her country, but is also a weapon for those who seek to destroy it. Faced with old secrets and new truths, she must decide if she will fight for her country or succumb to the delicious temptation of power.…
Buy Kindle Version
Buy Paperback Version 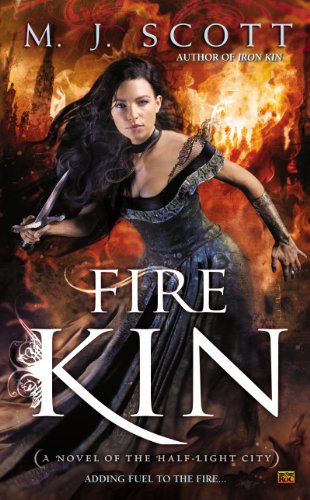 Fire Kin: A Novel of the Half-Light City

Imagine a city divided…a city readying itself for a war. The vampire Blood and the shape-shifting Beast Kind seek to seize control now that the treaty is broken. Only the humans stand in their way…but they stand without their Fae allies…and they desperately need help.... I chose to stay with the humans when the Fae withdrew from the City. I am a healer, and they need me. I know the odds are against them. I know they need reinforcements. But I never expected them to turn and seek aid from the depths of my past. Asharic is a powerful Fae, exiled by the Veiled Queen thirty years ago. Leaving me behind. But now the queen is dead and the throne is vacant, and Ash is returning to the City—my City—with his mercenary army. It would be false to deny that there is still a spark between us, but I will not be taken in again. And I’m not the only one disturbed by his return. A Blood lord is poised to conquer the Half-Light City, and other enemies new and old are gathering to eliminate the threat Ash poses. To save the City, we will have to join forces. And pray we’re not the ones who burn…
Buy Kindle Version
Buy Paperback Version 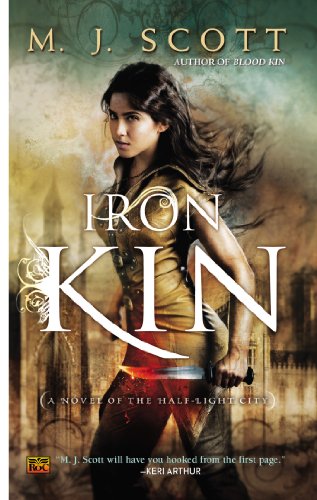 Iron Kin: A Novel of the Half-Light City

Imagine a city divided. Fae and human mages on one side, vampire Blood Lords and shape-shifting Beast Kind on the other. Between these supernatural forces stands a peace treaty that threatens to shatter at the slightest provocation.... I was raised to do the right thing. But to my family that means staying safe behind the walls of human society. To be a respectable metalmage and never put myself at risk. But the treaty is faltering. And if it fails, nothing is safe. To help save the city and everyone I care about, I will use whatever means I can to ensure the negotiations to renew the treaty are successful—even if that means forging an alliance with a man who is the very opposite of the right thing.... Fen is trouble. Wild. He would rather bind himself in iron and drink himself into oblivion than learn to master the visions that come to him. Those visions might just hold the key to peace, and it seems that my power might hold the key to his control—if I can keep it around him....
Buy Kindle Version
Buy Paperback Version 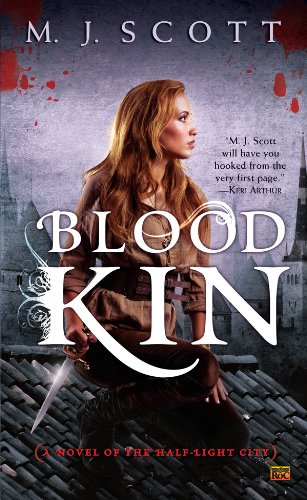 Blood Kin: A Novel of the Half-Light City

Imagine a city divided. A city where human and Fae magic rests uneasily next to the vampire Blood and the shapeshifting Beasts. A city where a fragile peace is brokered by a treaty that set the laws for all four races…a treaty that is faltering day by day. I didn’t plan on becoming a thief and a spy. But options are limited for the half-breed daughter of a Fae lord. My father abandoned me but at least I inherited some of his magic, and my skills with charms and glamours mean that few are as good at uncovering secrets others wish to hide. Right now the city has many secrets. And those who seek them pay so well… I never expected to stumble across a Templar Knight in my part of the city. Guy DuCaine is sworn to duty and honor and loyalty—all the things I’m not. I may have aroused more than his suspicion...but he belongs to the Order and the human world. So when treachery and violence spill threaten both our worlds, learning to trust each other might be the only thing that saves us. But even if a spy and a holy knight can work together, finding the key to peace is never going to be easy…
Buy Kindle Version
Buy Paperback Version 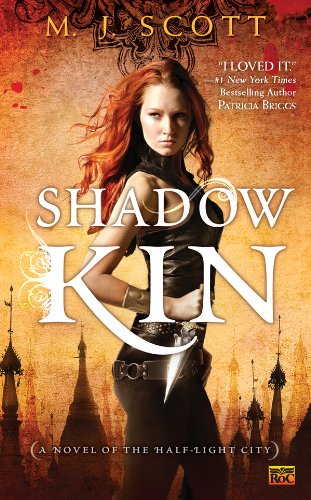 Shadow Kin: A Novel of the Half-Light City

On one side, the Night World, rules by the Blood Lords and the Beast Kind. On the other, the elusive Fae and the humans, protected by their steadfast mages... Born a wraith, Lily is a shadow who slips between worlds. Brought up by a Blood Lord and raised to be his assassin, she is little more than a slave. But when Lily meets her match in target Simon DuCaine, the unlikely bond that develops between them threatens to disrupt an already stretched peace in a city on the verge of being torn apart...
Buy Kindle Version
Buy Paperback Version 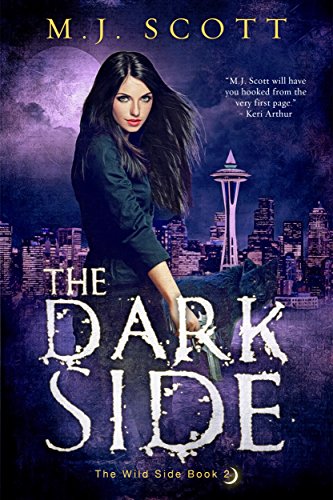 The Dark Side (The Wild Side Book 2)

Monsters used to be just her day job. Now they’re her life. Reluctant werewolf Ashley Keenan thought she’d faced her demons when she brought down McCallister Tate, the vampire who killed her family. She’s building a future with her werewolf fiancé, FBI Agent Daniel Gibson, but not everything is smooth sailing. For one thing, she still owes a debt to the dangerous vampire who controls Seattle. And, for another, she knows that Tate didn’t work alone … and his allies might not be done with her. Then a vicious attack leaves her best friend infected with an aggressive new strain of vampirism and Ash and Dan are sucked into the desperate fight to save her and to stop a plague of vampires overrunning humanity. A plague manufactured by the man who was helping Tate. When Dr. Smith and his vampire allies decide that Ashley’s family secrets might hold the key to making their new vampires unstoppable—and that the only way to get to those secrets is through Ash herself—the fight turns deadly. To save herself, her friend, and maybe even the world, Ash has to embrace her werewolf abilities, call on some dangerous allies, and take a walk on the dark side… A dark and sexy urban fantasy trilogy from M.J. Scott, RITA® Award nominated author of The Shattered Court and the Half-Light City series.
Buy Kindle Version 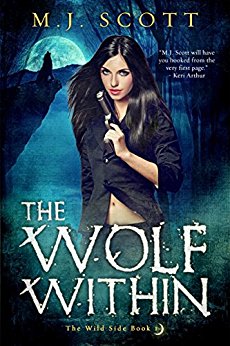 The Wolf Within (The Wild Side Book 1)

Vampires, werewolves, warring couples. And that’s just the day job. Ashley Keenan just wants a normal life but she lives in a world that’s left normal behind. If she keeps her head down and doesn’t annoy any of her supernatural clients she figures everything will be okay. Until the day that FBI Agent Daniel Gibson, ex-lover, now werewolf, and the man she’s never quite forgotten walks back into her life. Dan’s back because the vampire who murdered her family is coming after her. Worse, that the FBI needs Ash’s help to stop him. That means facing every nightmare from her past and spending every day with Dan, which is a whole other kind of nightmare when Ash knows she can never date a supernatural. It’s a fight to guard her heart and her life. And to survive she might have to learn to love her inner monster…
Buy Kindle Version
Buy Paperback Version
Scroll to top