I was born in 1948 in Ipswich, Queensland. My father served in the Australian Air Force during World War II and was also a Lay Preacher in the Presbyterian Church. My mother also served as an officer in The Women’s Royal Australian Air Force.
I have two sons, Damien who has an enquiring mind that is useful when I am considering all things military. My other son, Brendan is a publican in Tasmania which is quite remote from us. I miss him.
I went to school at Ipswich State High School and, after graduating, became a High School teacher teaching Art, History and English Literature. Once “safely married off”, I followed my husband, a Search and Rescue Searchmaster, to a number of locations throughout Australia.
During my travels, I studied with the University of Queensland as a remote student. The Arthurian legends have followed me for most of my life. From early childhood, when I was first introduced to the prose stories of Tennyson and later fell in love with his poetic skills, my imagination was “hooked” by the Arthurian personae. To supplement a number of other coincidences, I once lived in a suburb where the streets were named after the knights, whether by accident or happy design, I determined to study the literature of Arthur for my Masters and PhD degrees. Even my husband shares his first name (Arthur) with the Dux Bellorum (War Leader) of Britain, the hero who played such a large part in defending the Celtic tribes for some forty years.
For my PhD studies, I undertook a major study on Charles Williams, an English poet and novelist who wrote esoteric Arthurian literature during the period from 1920 to 1940. Although unknown to most of the wider literary establishment, Williams was a genius in his own right who wrote some of the most esoteric works produced in the 20th Century. His best-known works were his poetic triumphs, “Taliessin
Through Logres “and “The Region of the Summer Stars”. I loved his works, but he came across to me as a rather “weird” man.
I now live in Brisbane, Queensland, but escape to Europe and Britain for research as well as fun at every possible opportunity.
My writing is the culmination of my lifelong dream, it is very satisfying to see your own book in the bookstores and to read “favourable” reviews 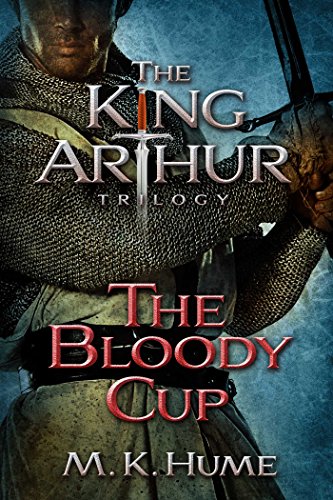 From the author of The Merlin Prophecy, the historical trilogy that “appeals to those who thrill to Game of Thrones” (Kirkus Reviews)—the third installment in the epic, action-packed story of King Arthur. Celtic Britain is on the brink of collapse, and the kingdom’s bloodiest days are upon it. For many years, the people of Britain have enjoyed peace and prosperity under the reign of King Arthur. But Arthur is now weakening with age, and the seeds of discontent are being sown. Seeking to cleanse the land of Christian belief, dissenters need a symbol with which to legitimize their pagan claim and unite the malcontents. They seize upon the ancient Cup of Bishop Lucius of Glastonbury as a way of fragmenting Arthur’s hard-earned kingdom. The ultimate threat to Arthur’s rule lies far closer to home: his own kin will betray him. Celt will slay Celt and the rivers will run with blood. Will all be lost, or can Arthur conquer the mounting forces before it’s too late?
Buy Kindle Version
Buy Paperback Version 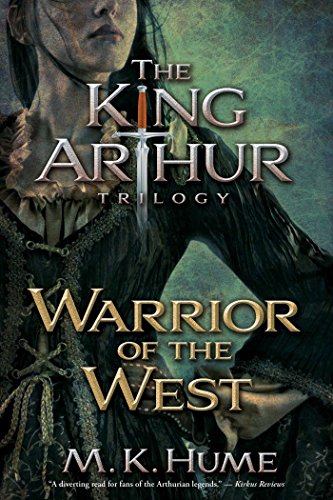 The King Arthur Trilogy Book Two: Warrior of the West

Twelve years have passed since Arthur was crowned High King. Against all odds, he has united Celtic Britain and banished the Saxons. Although he’s succeeded in defeating all external threats and his kingdom is at its zenith, it is now being undermined from within. Arthur has chosen evil Wenhaver as his queen and second wife. Wenhaver will always love what she cannot have and have what she cannot love, and her bitterness threatens to bring down all those around her. Arthur is betrayed by his wife and also learns of appalling perversion at the heart of his kingdom. With his guide and master tactician, Myrddion, gone, Arthur must decide how to proceed if he wishes to see Britain stand strong. The fate of a kingdom rests on his shoulders and his selflessness is put to the test. Could all that Arthur has bought for be lost forever?
Buy Kindle Version
Buy Paperback Version 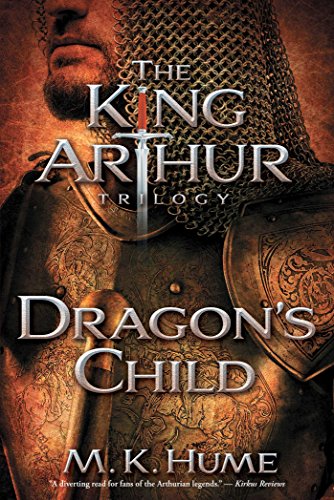 The Dark Ages: a time of chaos and bloodshed. The Roman legions have long deserted the isles and the despotic Uther Pendragon, High King of Celtic Britain, is nearing death. As the tyrant falters, his kingdom is being torn apart by the minor kings who jostle for his throne. But only one man can bring the Celts together as a nation and restore peace – King Arthur. We meet Arthur first as a shy, subservient twelve-year-old living in the home of Lord Ector, who took in the boy when he was a babe to protect him from murderous kin. One day, three influential men arrive at Ector’s villa and arrange for Arthur to be taught the skills of the warrior: blade and shield, horse and fire, pain and bravery. When they return years later, the country is in desperate straits, for the great cities of the east are falling to the menace of the Saxon hordes. In spite of Uther, Arthur becomes a war chieftain and wins many battles to earn him the trust of his Celtic warriors and prove that he alone can unite the tribes. But if he is to fulfill his destiny and become the High King, Arthur must find Uther’s crown and sword. The future of Britain is at stake.
Buy Kindle Version
Buy Paperback Version 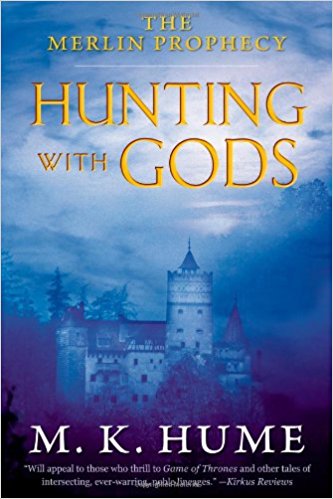 Disappointed after meeting his father in Constantinople, Merlin returns home to find Britain is engaged in a bloodthirsty war against the Saxons. Spared by the king of the Britons, he begins to train other healers across the land. But the king’s untimely death puts Merlin under the grip of Uther Pendragon, an evil war leader. Uther orders Merlin to use his magical powers to help him seduce the young wife of King Gorlois. The healer is horrified by the High King’s demands but realizes that many others will suffer at Uther’s hands if he disobeys. Can Merlin survive Uther’s madness and enable good to overcome evil? In Hunting with Gods, Merlin’s morality is challenged as never before. M. K. Hume has won the praise of readers and critics alike with her original take on the Merlin legend. Her background in Arthurian literature provides historical accuracy to a beautifully written trilogy wrought with passion, heart, and adventure.
Buy Paperback Version 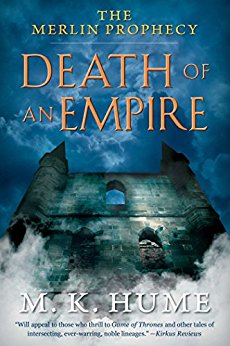 The Merlin Prophecy Book Two: Death of an Empire

Merlin is the product of a brutal rape. Determined to uncover his father’s identity, he sets sail from Celtic Britain with his band of loyal companions. Their journey through war-ravaged France, Rome, and Ravenna to Constantinople will push their strength to the limit and shape Merlin’s reputation as a great healer. The Roman Empire is under attack. Bound by an oath to relieve suffering the talented apothecary saves thousands of warriors from total destruction. A bloodier conflict between opposing powers arises, and Merlin must use all his resolve if he wishes to survive the death of an empire. M. K. Hume has won the praise of readers and critics alike with her original take on the beloved and enduring Merlin legend. Her background in Arthurian literature lends historical accuracy to a trilogy wrought with passion, heart, and adventure.
Buy Kindle Version
Buy Paperback Version 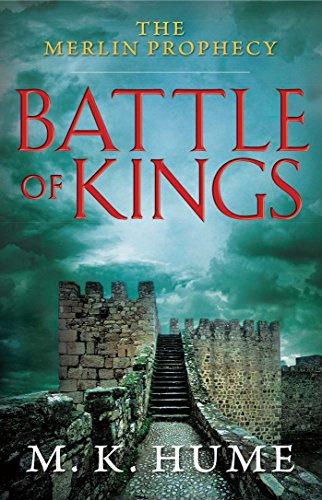 The Merlin Prophecy Book One: Battle of Kings

In the town of Segontium a wild storm washes a fugitive ashore. He brutally rapes the granddaughter of the ruler of the Deceangli tribe, leaving her to bear his son, Myrddion Merlinus (Merlin). Spurned as a demon seed, the child is raised by his grandmother and, as soon as he turns nine, he is apprenticed to a skilled alchemist who hones the boy’s remarkable gift of prophecy. Meanwhile, the High King of the Britons, Vortigern, is rebuilding the ancient fortress at Dinas Emrys. According to a prophecy, he must use the blood of a demon seed—a human sacrifice—to make his towers stand firm. Myrddion’s life is now in jeopardy, but the gifted boy understands that he has a richer destiny to fulfill. Soon Vortigern shall be known as the harbinger of chaos, and Myrddion must use his gifts for good in a land besieged by evil. So begins the young healer’s journey to greatness . . .
Buy Kindle Version
Buy Paperback Version
Scroll to top