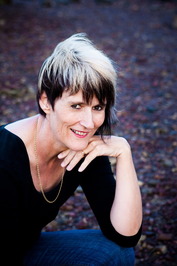 My word journey began when I was eight years old with a sweet Enid Blyton rip-off entitled ‘The Splendid Six’. My dear sister solemnly typed it for me on an old typewriter and made word substitutions all the way through.

At twenty my boyfriend and to-be husband gave me Rendezvous with Rama by Arthur C. Clarke to read. It opened a world of imagining that has seduced me ever since.

Science Fiction and writing didn’t coalesce, however, until my third son was born. It wasn’t that I had the time – more that I had the need. When my life was so very full of many things, it was missing ‘the’ thing.

Through the writing community I’ve made some of my closest friends, in the VISION writers group in Brisbane of which Cory Daniells and myself are founding members. 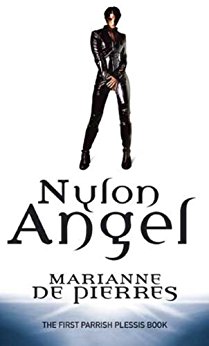 In a world where the rich live behind the safety of a giant fortress wall and everyone else can go to hell, Parrish Plessis has learnt some useful survival tactics. Like don't cross Jamon Hondo - unless you want to be dead by the morning. But heck, what's a girl supposed to do when the one chance she may have of escaping from his grubby, stinking paws presents itself? Anyway, it's hard to be a saint in a city, and Parrish Plessis is sick of doing what she's told. Tonight, she's going to take her chance. Because she can't face tomorrow. NYLON ANGEL is the first Parrish Plessis novel. She will be back. When you've met her, you'll understand why.
Buy Paperback Version 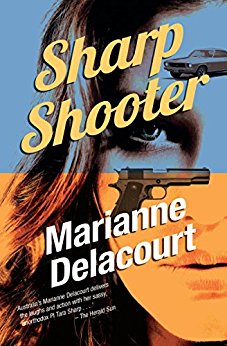 Book 2: SHARP TURN Book 3: TOO SHARP Book 4: SHARP EDGE Tara Sharp can see auras, and it’s ruining her life. When she tries to turn her inconvenient secret into a paying gig, her first job lands her in the middle of a tug of war between the biggest, baddest crime lord in town and the hottest business man Tara has ever met. With only a narcoleptic ex-roadie, her pet galah and a vanilla slice for back up, Tara is ready to take on trouble with a capital ‘T’. Sharp Shooter is a hilarious, action-packed novel and Tara Sharp is Triple F: Funny. Fast. Feisty. WINNER of the Davitt Award 2010 Best Crime Novel and nominated for Ned Kelly Award 2010 Best First Crime Novel Book 2 - SHARP TURN Book 3 - TOO SHARP Book 4 - SHARP EDGE, coming later 2017! REVIEWS: “Light, fast-paced, humorous, and yes, sharp, this Perth-based series is a lot of fun to read. As the cover declares, Delacourt has created a heroine Janet Evanovich fans will love – only this lanky lady is pure Aussie. You’ve not met anyone quite like her.” – Tara Moss’s Book Club, 13th Street  “Australia’s Marianne Delacourt delivers the laughs and action with her sassy, unorthodox PI Tara Sharp...” – The Herald Sun “Tara Sharp is a gust of fresh air in the local crime fiction scene. While it is wonderful that our more literary crime writers are finally getting the attention they deserve, there’s still plenty of room for fast-paced commercial female-oriented Australian crime fiction. And Marianne Delacourt (aka sci-fi writer Marianne de Pierres) has certainly nailed that brief. – The Australian Bookseller and Publisher. “Marianne Delacourt’s heroine – Perth PI Tara Sharp – invites comparison with Janet Evanovich’s Stephanie Plum, and there’s no doubt if you’re an Evanovich fan you’ll enjoy this. Sharp, however, has the added wrinkle of being able to read peoples auras, as much a curse as a blessing.” – Scoop Magazine
Buy Kindle Version
Buy Paperback Version 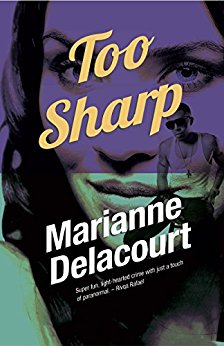 Tara Sharp’s new case brings her to Brisbane, where she is placed in charge of Slim Sledge, a high-maintenance rock star. Tara’s a sucker for a backstage pass, and it'll provide some much-needed distance between herself and her mother's not-so-subtle hints about getting a “real” job, not to mention crime lord Johnny Viaspa, the only man on the planet who wants her dead. She expected the music industry to be cut-throat, but Tara soon uncovers more problems than just Slim Sledge's demands and his rabid fans. Everywhere she turns, the grudges run deeper and the danger ramps up. Has Tara finally pushed her luck too far?
Buy Kindle Version
Buy Paperback Version 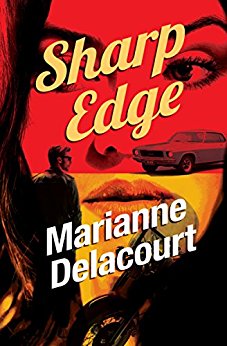 Dead bodies, a complicated love life, and a conflict between the local drug cartels, and a favour owed to the local bikies have Tara scrambling to stay ahead of the game. Just another Tuesday for Tara.
Buy Kindle Version
Buy Paperback Version
Scroll to top