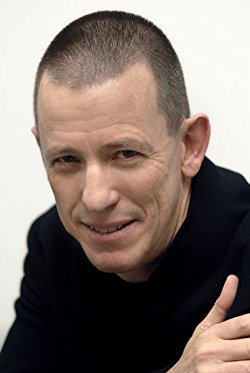 Best-selling author of the ‘Laws of Magic’ series, Michael Pryor was born in Swan Hill, Victoria, and currently lives in Melbourne. He has worked as a drainer’s labourer, a truck driver, a bathroom accessories salesperson, an Internet consultant, a software developer, a textbook publisher, in a scrap metal yard and as a secondary school teacher.
Michael has published more than thirty popular and critically acclaimed novels, more than fifty short stories, and has over one million words in print. His work has been longlisted for an Inky award, shortlisted for the WAYBR award and six times shortlisted for the Aurealis Award. Seven of his books have been awarded Children’s Book Council of Australia Notable Book status. 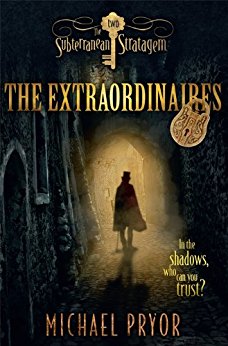 The Extraordinaires 2: The Subterranean Stratagem

The theatre can wait. First there's a mystery to solve, not to mention a world to save . . . Kingsley Ward and Evadne Stephens are the Extraordinaires and they should be the toast of the town - but their juggling and escapology act is failing, and Kingsley is to blame. His wolfish side is breaking free, ruining performances and endangering those around him. The secret to controlling this wildness lies in his mysterious past. Was he really raised by wolves? Who were his parents? What happened to them? The discovery of Kingsley's father's journal promises answers, but when it is stolen the Extraordinaires uncover ancient magic, a malign conspiracy, and a macabre plot to enslave all humanity. What begins as a quest to restore Kingsley's past becomes an adventure that pits the Extraordinaires against forces that could shatter the minds and souls of millions.
Buy Kindle Version
Buy Paperback Version 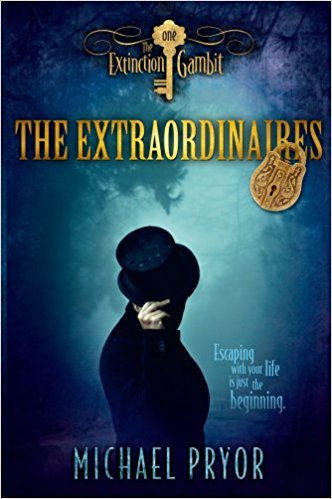 The Extraordinaires 1: The Extinction Gambit

The intriguing beginning of a brilliant new fantasy trilogy from the master of magic, Michael Pryor. Kingsley Ward is in dire trouble. Instead of thrilling the audience with his death-defying escapology, his first performance ends in disaster when his hidden wolfish nature bursts free. That same night, his father is abducted and his home ransacked. To find Dr Ward and redeem himself, Kingsley braves the Demimonde, the mysterious world that exists alongside our own. He is soon the target of two warring factions: immortal magicians whose diabolical plans will create mayhem at the 1908 Olympics, and the last Neanderthals, whose vengeance will wipe out humankind. Kingsley needs help. The famous author Rudyard Kipling will assist, but why is he so interested in Kingsley? Evadne Stephens, juggler and weaponsmith, is a Demimonde expert - but what does her mercurial nature conceal? Bizarre plots. Sinister magic. The extraordinary is about to happen . . .
Buy Kindle Version
Buy Paperback Version 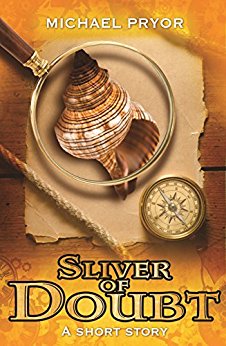 agic, manners, conspiracy and intrigue - yes, it's a Laws of Magic story! Judging a flower arranging competition because your father, the Prime Minister, is busy almost seems like a punishment. But when you're Aubrey Fitzwilliam, magical genius, things rarely go to plan, and the day takes a decidely non-floral turn when Aubrey is asked for help in a suspected case of magical blackmail. Secret societies, spies, a basement laboratory? Aubrey won't let a barred window - and the possibility of mortal danger - stand in his way. Sliver of Doubt is a story in the Laws of Magic world. Set in a world similar to Edwardian Britain, just before World War I, The Laws of Magic stars Aubrey Fitzwilliam, the son of a prominent ex-prime minister, who's brilliant at magic - and just as good at finding trouble.
Buy Kindle Version 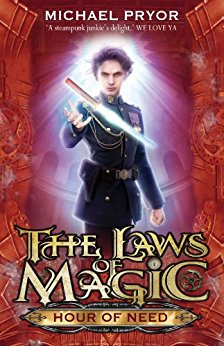 Laws Of Magic 6: Hour Of Need (The Laws of Magic)

In the earth-shattering final book of the Laws of Magic series, Aubrey goes deep into the lair of his enemy in an attempt to save the world Aubrey Fitzwilliam, renegade and traitor. Instead of clearing his name in Albion, Aubrey has chosen to pursue his enemy, Dr. Mordecai Tremaine, deep into the heart of enemy territory. What he uncovers in Dr. Tremaine's stronghold promises to change the course of the war and the future of humanity itself. A hideous combination of electrical science, golem manufacturing, and soul-shattering magic is bringing the world far closer to the edge of the abyss than anyone apart from Aubrey realizes. Alone, reviled, and hunted, this is Aubrey's last chance to save the world—for if he doesn't there might not be a world left to save.
Buy Kindle Version
Buy Paperback Version 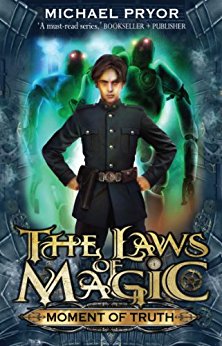 Laws Of Magic 5: Moment Of Truth (The Laws of Magic)

In the penultimate book of Michael Pryor's brilliant steampunk adventure series, the war that has loomed for so long is finally declared. Can Aubrey's magic save him this time? The unthinkable has happened: Albion is at war. Aubrey and George are swept up into the military - but not in the way they expect. With Caroline drafted into the Special Services, Aubrey is sure the combination of his magic, George's practical skills and Caroline's fighting secrets will make them a formidable team. But what if the military hierarchy has other ideas? When Aubrey's top secret espionage unit is sent to Gallia to investigate mysterious magical emanations, what they discover is intelligence gold. Holmland is about to unleash an unstoppable horror upon the world. It could win the war within weeks. Aubrey is in a dilemma: should he obey orders and simply observe, or should he and his friends do their best to stop a bloodbath? Saving thousands of lives could cost Aubrey his own. But that's never stopped him before.
Buy Kindle Version
Buy Paperback Version 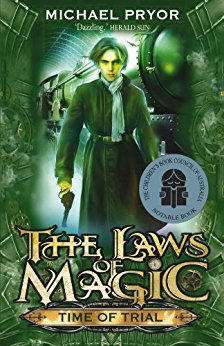 Laws Of Magic 4: Time Of Trial (The Laws of Magic)

After narrowly escaping the worst fate imaginable, Aubrey realizes there's only one thing left to do—he must confront his nemesis, on his own evil ground It may look like a simple wire device, but the Beccaria Cage could be the cure for Aubrey's condition: a way to reunite his body and soul. But can Aubrey solve its mysteries while Dr. Tremaine's warmongering machinations gather pace? After magical confrontations, near-death experiences, and the appearance of new allies and new enemies, Aubrey decides that there is only one thing to do: carry the fight to the enemy. Thanks to a fortuitously timed symposium, Aubrey, George, and Caroline accompany Lady Rose and Prince Albert to Holmland—into the heart of hostile territory—only to find the city of Fisherberg infested with ghosts, brigands, and shadowy figures with agendas of their own. While trying to prevent a war, could Aubrey Fitzwilliam inadvertently trigger one?
Buy Kindle Version
Buy Paperback Version 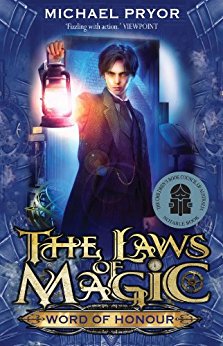 Laws Of Magic 3: Word Of Honour (The Laws of Magic)

Aubrey and George struggle to concentrate on their studies amidst mysteries, secret adversaries, and deep undersea adventures Magical genius Aubrey Fitzwilliam, along with his loyal friend George, is trying to immerse himself in his new life at college. But for Aubrey life is never straightforward. When Aubrey's father, the Prime Minister, invites them to take a ride on a top-secret submersible, Aubrey and George can't resist. But a sudden magical attack threatens to send them to the bottom of the ocean and begins a whirlwind series of events—a plot to rob Albion's largest bank, strange underground disturbances, and an opera singer who bears an uncanny resemblance to Aubrey's nemesis, Dr. Tremaine.
Buy Kindle Version
Buy Paperback Version 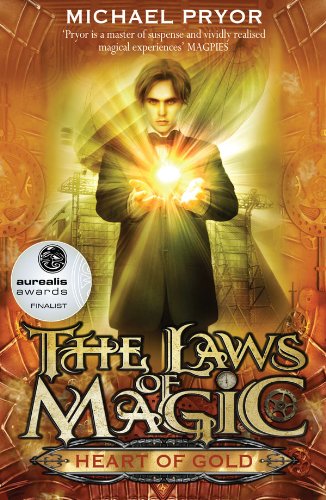 Laws Of Magic 2: Heart Of Gold (The Laws of Magic)

Magical genius Aubrey Fitzwilliam is about to become involved in a convoluted series of adventures . . . again At a loss after finishing their end-of-year exams, Aubrey and George travel to the Gallian capital, Lutetia, where it so happens that the lovely Caroline is studying natural history. Aubrey wants to pursue a cure for his condition—though his family has other ideas, and he's soon burdened with a royal mystery to solve, old letters to procure, a missing ornithologist to locate, and a spot of diplomatic espionage. These tasks should keep Aubrey occupied—but that would be underestimating his sense of curiosity and uncanny knack of being in the wrong place at the wrong time. Someone is stealing people's souls and turning them into mindless monsters, and the country's magical lifeline, the Heart of Gold, has been stolen, leaving the city in chaos. Aubrey, George, and a somewhat reluctant Caroline are on the case in this engaging read.
Buy Kindle Version
Buy Paperback Version 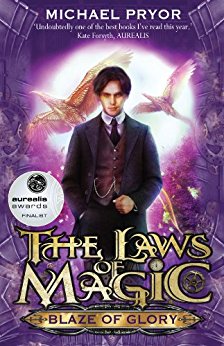 Laws Of Magic 1: Blaze Of Glory (The Laws of Magic)

Magic and alternate history mixed with a large serving of boys' own adventure and a pinch of the fun and wittiness of Sherlock Holmes . . . Aubrey Fitzwilliam is the son of a prominent ex-prime minister. He's also brilliant at magic, but he's stuck at military school. At least he has his best friend, George, there to back him up. George would follow Aubrey anywhere - and with Aubrey's talent for thinking up daring schemes that will get them both in trouble, that's no easy thing to do. At a royal hunting party, the boys discover a golem, a magical creature built to perform one task: to kill Prince Albert. Aubrey and George are hailed as heroes for foiling the murder attempt - but who sent the golem, and why? Aubrey is far too curious to let the authorities handle this one, and he and George start investigating . . .
Buy Kindle Version
Buy Paperback Version
Scroll to top