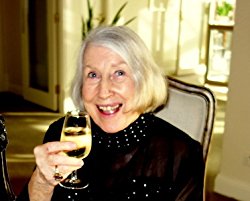 Interview with Author Pamela M. Arnold who likes to include coming trends in her Biddy and Justin suspense thrillers. Describing herself as a Geriatric nouveau author, she had fun including a driverless car in pending Book Four.

“ I wish the Google autonomous cars were already a reality. Now in our eighties, my husband and I would certainly appreciate one, delighted to hear that South Australia is trialling road systems to accommodate them.”

“There is much pleasure from creating characters, and plotting every day news into suspense thrillers. I wish more retirees would have a go, it’s a luxury to have the time to write, with a computer waiting patiently for one to enjoy.” Pam said. “Although my stories are usually international I generally try to include South Australia and our Icons. In the current book, one protagonist was able save himself because he was wearing RM.Williams elastic side boots”. ” Did you set out to write a series?”

“The books have been fun to write, accidentally becoming a series, as readers seemed to enjoy the characters. Pacific Incident 9-11-13 was the first international one published, written after a cruise. The first, ‘Murder In Tusmore Park’ was written during the writing course, and Book three‘ The Procurers’, another International, was commenced on ‘The Sun Princess’. “Book 4 is in first draft' " Have you chosen a title?” “Either, the’ Provincal Agenda’ or ‘The Forty Second App’. It includes a very beautiful Humanoid receptionist who has been fitted with an extra App, a sex drive”.

“Have you considered writing your memoirs Pam?
An adamant , “No way, it’s not exciting enough, and even the suggestion might alarm some people!” 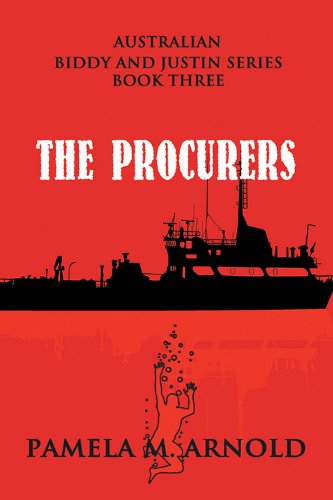 In The Procurers, amateur but lively senior sleuths Biddy and Justin find themselves back on board the Pacific Queen Royale, as agents for the Australian National Veterans Network. They are tasked with uncovering increasing and unexplained passenger disappearances at sea, and also to keep an eye on Professor Witherspoon, who is working with a world consortium to provide free, clean fusion energy via a Tokomak reactor in France. ANVN and Detective Inspector Brien Schultz from Adelaide Crime, also seeks help from celebrated Australian yachtsman, Sir Tim Harvey, to uncover terrorists at sea, whom Biddy suspects of abducting boat people as fodder for body parts, and processing them aboard the Goliath, a giant fishing trawler fitted with huge freezers. As one of the abductees is an American National, the U.S. Coast Guard is involved, providing use of a Black Hawk helicopter to track the Goliath, which escapes for concealment to an Indian ship demolition graveyard to continue its macabre butchery. Will Justin and the Black Hawk crew be in time to save Biddy and the abductees on the disabled trawler from imminent demolition? About the Author: Retiring from a successful business at age 75, Pam Arnold discovered the fun of writing. The Procurers, the third in the Biddy and Justin suspense thriller series, is acclaimed as the most exciting yet. It is often suggested that Pam, now 81, should write her memoirs. The reply, an adamant, “No way, even the suggestion might alarm some people!”
Buy Kindle Version
Buy Paperback Version 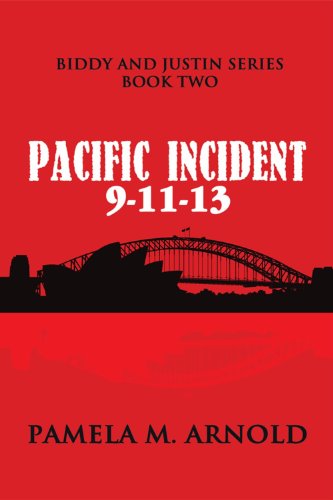 Pacific Incident 9-11-13 is a fascinating, well-plotted thriller, with compelling characters and genuine suspense. While on a cruise, jet-setting retiree couple, Biddy and Justin uncover an extremist jihadist plot designed to punish Australia for deploying troops to Afghanistan. Extremists have smuggled a suitcase sized nuclear device aboard the ship the couple are cruising on, and plan to destroy the famous Sydney Harbor Bridge. But to prevent the plan from being carried out, Biddy and Justin must stop Rukan, a Christian born woman who was kidnapped by the Taliban as a child and brainwashed into becoming a nuclear terrorist. Having infiltrated the ship as an aesthetician, Rukan is intrigued by the ways of the west. But will her curiosity be enough to dissuade her from carrying out this spectacular act of terror? It’s a race against time as Biddy and Justin, aided by detective inspector Brien Schultz must attempt to thwart the catastrophic detonation in Pacific Incident 9-11-13. About the Author: After retiring from a successful business career at age 75, Pamela M. Arnold undertook a WEA writing course and wrote the first book in the Biddy and Justin Series, Murder in Tusmore Park. This, the second book in the series, was inspired by a cruise she recently took. Currently she is working on another Biddy and Justin mystery that’s set to be titled The Procurers. Shortly after commencing work on Pacific Incident 9-11-13 Pamela lost her sight due to macular degeneration. However after two years of monthly injections into her eyes, she can see and type once again, debut in publishing at age 80.
Buy Kindle Version
Buy Paperback Version 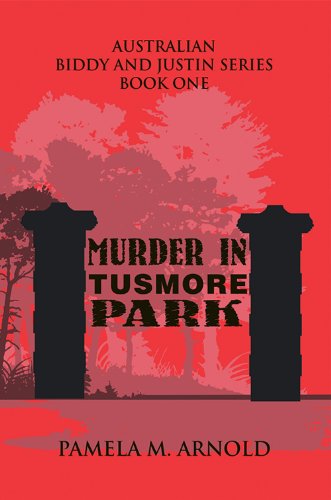 Murder in Tusmore Park : Biddy and Justin Series Book I

Synopsis: Murder in Tusmore Park is the first in the Biddy and Justin Series, the forerunner to the second book Pacific Incident 9-11-13. This novel has the same compelling characters and is a fascinating, well-plotted thriller with genuine suspense. Another page turner by author Pamela M. Arnold! Lively sixty-year-olds Biddy and Justin are embroiled in a series of homicides, two of which are committed in the park opposite Justin’s duplex. Due to Justin finding both bodies, the couple become police suspects. The murders continue and Biddy becomes an amateur sleuth to exonerate them both. Targeting Biddy, the wily psychotic killer eventually manages to trap her. While Justin and the police desperately search for her, Biddy, who is drugged, tortured, and her dog killed, prays they will find her in time. About the Author: In 1966, Pamela M. Arnold established a modeling, television, song and dance school for tots, teens and adults in Adelaide, South Australia, which included the first Australian male modeling courses. Nanny, and childcare was added, and the Pam Arnold Centre was awarded the first National Accreditation for the Diploma in Children’s Services. Upon retirement, the author took a writing course at the WEA, Adelaide, and Murder in Tusmore Park was born. After a Pacific cruise, she recommenced writing, but macular degeneration intervened and her second book Pacific Incident 9-11-13 was delayed two years. A sequel, The Procurers, is well underway. Publisher’s website: http://sbpra.com/PamelaMArnold
Buy Kindle Version
Buy Paperback Version
Scroll to top