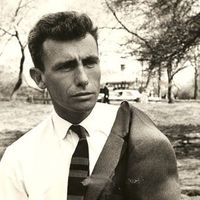 Born in Geraldton, Western Australia, Randolph Stow attended Geraldton Primary and High schools, Guildford Grammar School, the University of Western Australia, and the University of Sydney. During his undergraduate years in Western Australia he wrote two novels and a collection of poetry, which were published in London by Macdonald & Co. He taught English Literature at the University of Adelaide, the University of Western Australia and the University of Leeds.
He also worked on an Aboriginal mission in the Kimberley, which he used as background for his third novel To the Islands. Stow further worked as an assistant to an anthropologist, Charles Julius, and cadet patrol officer in the Trobriand Islands. In the Trobriands he suffered a mental and physical breakdown that led to his repatriation to Australia. Twenty years later, he used these last experiences in his novel Visitants.
Stow's first visit to England took place in 1960, after which he returned several times to Australia. Tourmaline, his fourth novel, was completed in Leeds in 1962. In 1964 and 1965 he travelled in North America on a Harkness Fellowship, including a sojourn in Aztec, New Mexico, during which he wrote one of his best known novels, The Merry-Go-Round in the Sea. While living in Perth (WA) in 1966 he wrote his popular children's book Midnite.
From 1969 to 1981 he lived at East Bergholt in Suffolk in England, his ancestral county, and he used traditional tales from that area to inform his novel The Girl Green as Elderflower. The last decades of his life he spent in nearby Harwich, the setting for his final novel The Suburbs of Hell. He last visited Australia in 1974.
His novel To the Islands won the Miles Franklin Award for 1958.[1] He was awarded the Patrick White Award in 1979. As well as producing fiction, poetry, and numerous book reviews for The Times Literary Supplement, he also wrote libretti for musical theatre works by Peter Maxwell Davies.
A considerable number of Randolph Stow's poems are listed in the State Library of Western Australia online catalogue[2] with indications where they have been anthologised. 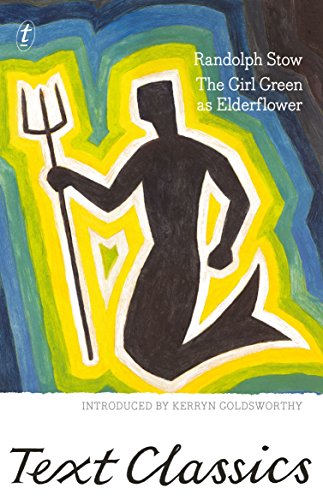 The Girl Green as Elderflower

He thought of his dream, of how he had looked up out of his hole, his pit, his wolf-pit, and seen the foreign leaves, which had formed themselves into a face… Laid low by a tropical disease and an accompanying malaise, Crispin Clare returns to his ancestral home in East Anglia. Local folklore seeps into his fever dreams and into his writing, and the lines between reality and myth soon start to blur. In this finely woven tale of illness and recovery, family and fable, Randolph Stow creates a unique imaginative landscape, populated by figures from old English myths and legends, and from Clare’s present.
Buy Kindle Version
Buy Paperback Version
Buy Hardback Version

The Suburbs of Hell

His eyes are on the one eye of the rifle. His mouth splits open his brown beard. He throws up a hand, palm outward, in an unwilled, futile gesture to ward off death. A killer is hounding the seaside town of Old Tornwich. Residents are gripped by fear and suspicion, and the finger of blame is pointed in all directions. But the bodies keep falling and the crimes remain unsolved, the culprit at large. No mere whodunnit, The Suburbs of Hell—its story inspired by a real-life serial killer—is a profoundly disturbing psychological drama with a devastating conclusion, the final work of one of Australia’s greatest writers.
Buy Kindle Version
Buy Paperback Version
Buy Hardback Version 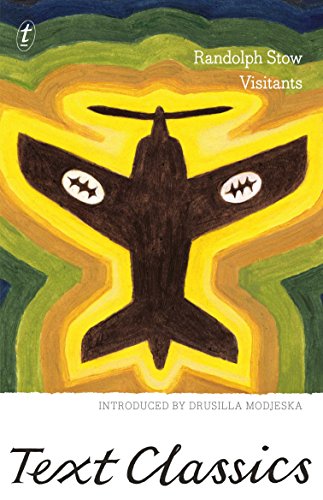 I want to die. I do not want to be mad...It is like my body is a house, and some visitor has come, and attacked the person who lived there. After an Australian patrol officer commits suicide on a remote New Guinea island in 1959, five witnesses are called to a government inquiry. Each has a disturbing story to tell: strand by strand, the mystery of the officer’s past is unravelled. But what of other visitants, like the unidentified flying object and the cargo cult it has inspired on the island? Informed by Randolph Stow’s experiences, Visitants is an original, astonishing investigation of colonialism.
Buy Kindle Version
Buy Paperback Version
Buy Hardback Version
Scroll to top