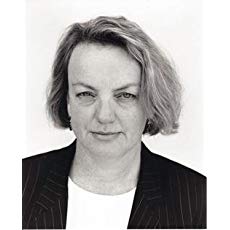 Sara Douglass was born in Penola, South Australia, and spent her early working life as a nurse. Rapidly growing tired of starched veils, mitred corners and irascible anaesthetists, she worked her way through three degrees at the University of Adelaide, culminating in a PhD in early modern English history. Sara Douglass currently teaches medieval history of La Trobe University, Bendigo and escapes academia through her writing 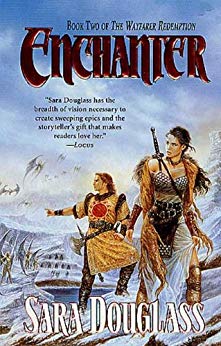 The stunning sequel to The Wayfarer Redemption Axis is a true hero, in every sense of the word. On his shoulders lies the double burden of prophecy and war. Having fulfilled the first part of the prophecy by becoming the StarMan, he now must reunite the three races inhabiting his world. It is his destiny to lead an army against his evil half-brother, to regain control of Tencendor, once the greatest land in the world. It is his destiny to be caught between the two women he loves, one the epitome of gentility, beauty, and intelligence, the other a fierce warrior with a cunning wit. And it is his destiny to be thwarted at every turn by the vicious Goragel, an insane monster bent on destroying all that Axis works to preserve . . . Enchanter is the riveting sequel to Sara Douglass's spell-binding first novel The Wayfarer Redemption, and winner of the 1996 Aurealis Award for Best Fantasy Novel. Sara Douglass has taken America by storm with this powerful tale of love, prophecy, battles, and revenge. At the Publisher's request, this title is being sold without Digital Rights Management Software (DRM) applied.
Buy Kindle Version
Buy Paperback Version
Buy Hardback Version 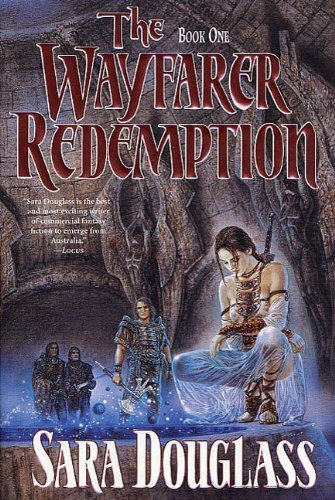 The Wayfarer Redemption: Book One

A millennia-old prophecy was given when the Forbidden Ones were driven from Achar. And now, the Acharites witness its manifestation: Achar is under attack by an evil lord from the North, Gorgreal-his ice demons strike from the sky and kill hundreds of brave warriors in the blink of an eye. All Acharites believe the end is near. One young woman, Faraday, betrothed of Duke Borneheld, learns that all she has been told about her people's history is untrue. While fleeing to safety from the dangerous land, Faraday, rides with Axis, legendary leader of the Axe-Wielders-and hated half-brother of Borneheld-and a man Faraday secretly loves although it would be death to admit it. She embarks on a journey, which will change her life forever, in search of the true nature of her people. This grand and heroic story tells the tale of one woman's plight to learn the truth of her people and change their hearts and their minds forever. She fights against oppressive forces to share this reality and will not desist until everyone knows. . . . . The truth of the Star Gate At the Publisher's request, this title is being sold without Digital Rights Management Software (DRM) applied.
Buy Kindle Version
Buy Paperback Version
Buy Hardback Version 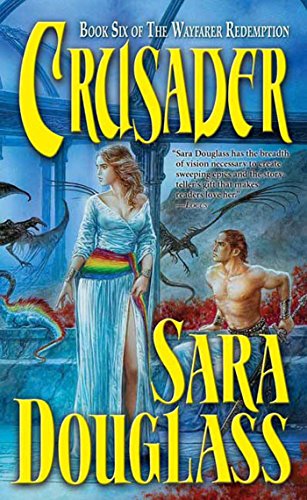 From epic fantasy author Sara Douglass comes Crusader, The sixth book in The Wayfarer Redemption series For countless millennia the Star Dance and the TimeKeeper Demons have battled their way across the universe, destroying innumerable planets, laying waste to civilizations across the cosmos. Choosing the land of Tencendor as their last battleground, the demons break through the Star Gate. The Gate destroyed, all magic in the world is gone and the three races of Tencendor are plunged into a vortex of chaos, madness, and death. Caelum SunSoar, son of the near-immortal Starman Axis and beloved ruler of all the land's peoples, is dead. Leaderless, those not killed outright or driven mad flee to the one place left to them, Sanctuary, a magical place created ages past to shield all who are good from the wrath of the demons. There is for some one hope left: DragonStar, Axis's other son. Many believe he is the true StarSon, the only being that can save their world. Others are just as convinced that he is in league with the demons and will be their doom. Only DragonStar knows the truth and as he and his companions go forth to do battle he prays that he may convince all that his motives are pure. What he does not know is that there is a traitor who plans to hand Sanctuary over to the Demons. A betrayer whose actions could force DragonStar to make a sacrifice so bloody and horrific that it could mean the destruction of everything that he holds dear in this life or the next. And if he fails, he could doom Tecendor to an eternal hell. At the Publisher's request, this title is being sold without Digital Rights Management Software (DRM) applied.
Buy Kindle Version
Buy Paperback Version
Buy Hardback Version
Scroll to top
We use cookies to ensure that we give you the best experience on our website. If you continue to use this site we will assume that you are happy with it.Ok