Shaun Tan grew up in the northern suburbs of Perth, Western Australia. In school he became known as the 'good drawer' which partly compensated for always being the shortest kid in every class. He graduated from the University of WA in 1995 with joint honours in Fine Arts and English Literature, and currently works as an artist and author in Melbourne.

Shaun began drawing and painting images for science fiction and horror stories in small-press magazines as a teenager, and has since become best known for illustrated books that deal with social, political and historical subjects through surreal, dream-like imagery. The Rabbits, The Red Tree, Tales from Outer Suburbia, Rules of Summer and the acclaimed wordless novel The Arrival have been widely translated and enjoyed by readers of all ages. Shaun has also worked as a theatre designer, a concept artist for animated films including Pixar's WALL-E, and directed the Academy Award-winning short film The Lost Thing with Passion Pictures Australia. In 2011 he received the presitgious Astrid Lindgren Memorial Award, honouring his contribution to international children's literature. 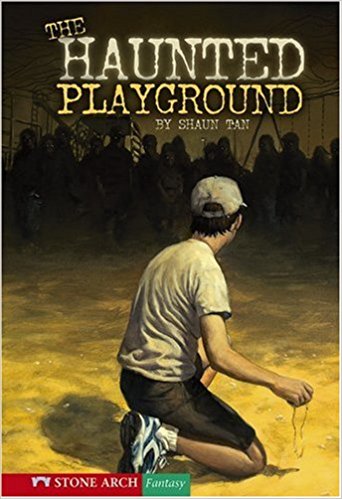 Gavin is obsessed with hunting for treasure with his metal detector. He finds the perfect spot--a huge, sandy playground. Then he meets a bunch of kids who have a mysterious treasure hunt of their own. Gavin gets the feeling they want him to stay . . . forever.
Buy Kindle Version
Scroll to top