Steve J. Spears was an Australian playwright, actor, writer and singer. His most famous work was The Elocution of Benjamin Franklin. He was cited as "one of Australia's most celebrated playwrights". 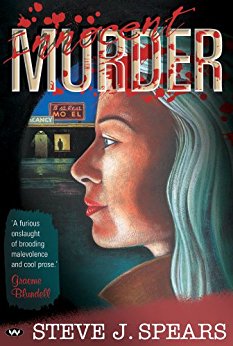 In 'Innocent Murder', Investigator Ng and Stella Pentangeli work different sides of the crime fence. Ng's case is one of triads, sex slavery and murder. Stella's case is a showbiz trifle - she must discover who is stealing plotlines from the hugely successful soap 'The Young and the Naked' and selling the information to a rival channel. Steve J. Spears was a multi-award winning writer and author of the classic Australian play, 'The Elocution of Benjamin Franklin'. 'Spears' novel is a fast-paced, deliciously wicked parody of the world of showbiz. It has everything you could ever want from comic crime fiction - sex, drugs, laughs and a ridiculously high body count.' - Age Pick of the Week. 'Like a satire of early James Ellroy - with laughs.' - Graeme Blundell, Australian (newspaper)
Buy Kindle Version
Buy Paperback Version
Scroll to top