I grew up in a working class family in Melbourne where, apart from being a paperboy, my first job as a teenager was recycling aluminium and steel in my uncle’s scrap metal yard. After leaving school in Year 12, I was a cadet reporter at the age of 18 on The Sun News-Pictorial in Melbourne.

At the age of 22 I took ship to Mexico, hitchhiked to Texas, bussed around South America, and finally settled in Costa Rica to study languages at the University in San Jose. After a year, all savings depleted, I went home to work as a radio journalist; first at Melbourne’s 3AW, then in London at LBC and Independent Radio News.

Home again, I joined the new Sydney station 2WS, then moved to the ABC in 1980. I had a terrific 26 years with Aunty, during which time I was the ABC’s bureau chief in New Delhi and Washington DC. Along the way I was awarded two Walkleys for excellence in journalism and a Master of Arts from Macquarie University.

My final position at the ABC was as executive producer of The World Today, and I left that some years ago to write full time, as well as indulge my passions for motorcycling, sailing, and being a dad to three daughters in Sydney. I’ve written two historical novels, A Fatal Tide published by Random House Australia in August 2014, and Killing Kitchener published by Amazon as an eBook and paperback in November 2017. 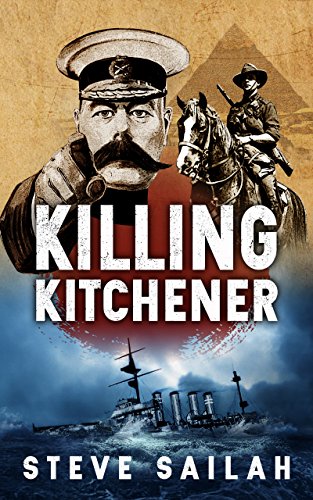 One bloody bullet gets you in the end, he said as he coughed up a mouthful of blood and exhaled one last long breath…’ A single murder lies at the heart of this compelling crime mystery that moves from the battlefields of Turkey and Palestine to the storm-tossed North Atlantic during World War One. It is 1916 and teenage sniper Thomas Clare knows only too well what a single bullet can do as he struggles with his ghosts from the blood-soaked gullies of Gallipoli. A first love affair in exotic Cairo helps him bear the pain of lost comrades, until a corrupt policeman from his past turns up dead. Thomas unearths a mystery connecting his murdered parents to war crimes committed a generation before – the only clue, a blood-stained bayonet. Accompanied by Lawrence of Arabia, Thomas soon finds himself in the middle of a plot to assassinate the British Empire’s most famous warrior. KILLING KITCHENER – a powerful novel of adventure, love and betrayal – is for everyone who has ever wondered about the price of murder in war. Scroll up and buy to start the adventure today.
Buy Kindle Version
Buy Paperback Version
Scroll to top