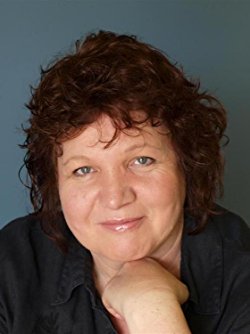 I was born and raised in New Zealand, moving to Western Australia with a single suitcase when I was nineteen years old. Since then, I’ve packed a lot into my life, working hard in predominantly accounting, IT and management roles, but also spending a year touring the world. I’ve lived in the central business districts of large cities, suburbia, idyllic seaside locations, rural areas, bushland, and remote desert mining camps.

Mid 2002, I quit my high-pressure management job and moved with my husband to a farm about ninety minutes north-east of Melbourne to write fulltime. Since then, I’ve written five (six if you count my first one, now banished to the bottom drawer never to see the light again) standalone contemporary murder mysteries.

Outside of writing and reading, my main focus is design, art and photography. I like to laugh, drink coffee, spend time alone, spend time in company, and get close to nature. I dislike crowds, hospitals and offal.

I write fast-paced mystery and suspense novels in contemporary Australian settings. All my books are quick, easy reads with no gratuitous sex or violence – the type of books I enjoy as a reader. However, my characters occasionally swear.

My books are all standalones, but in order published:

SLEIGHT MALICE: When a badly charred body is discovered in the remains of her best friend’s home, Desley James is devastated. Except the body is male and her friend is missing.

BRITTLE SHADOWS: Two months after finding her fiancé’s naked corpse hanging from a wardrobe rail in their apartment, Jemma Dalton’s sister takes her own life, leaving Jemma to probe the dark shadows of her sister’s life.

FATAL LIAISON: The lives of two strangers, Greg Jenkins and Megan Brighton, become inextricably entangled when they each sign up for a dinner dating agency. But Greg's reason for joining has nothing to do with looking for love.

BITTER NOTHINGS: A woman and her two children are murdered in their beds, the father the prime suspect until he turns up dead on an isolated bush track.

Thin Blood, my first published title, was released on Kindle in May 2010. Peaking at #1 in Kindle mysteries and at #6 in ALL paid Kindle books, it was named an Amazon 2010 Customer Favorite.

The inspiration for each of my stories comes from news articles and true crime cases, to which I then apply series of what-ifs. By the time I’ve finished, the news item is so bent out of shape it’s unlikely anyone would recognise the true crime that sparked it. 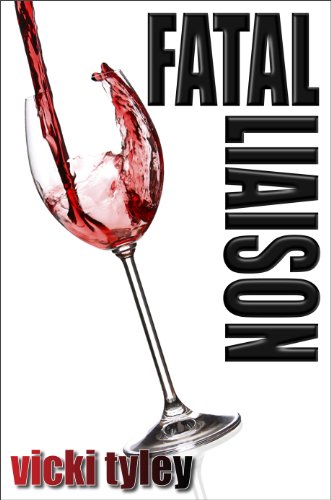 "...easy, fluid readability factor. I didn't want to put the book down, and it was immensely enjoyable.” MotherLode blog The lives of two strangers become inextricably entangled when they each sign up for a dinner dating agency. Greg's reason for joining has nothing to do with looking for love. His recently divorced sister has disappeared and he’s convinced that the agency, or at least one of its clients, may be responsible. Neither is Megan looking for love. Although single, she only joined at her best friend’s insistence—then her friend disappears without a trace. When a client of the dating agency is murdered, suspicion falls on several of the members and Megan and Greg join forces. Will Megan and Greg solve the mystery, or are they about to step into the same inescapable snare? "It's easy, enjoyable, captivating reading, and I am eagerly awaiting the release of her fifth...” Book Boogie "Vicki Tyley is the Australian P.D. James - a writer whose work is a can't miss read." American Editor
Buy Kindle Version 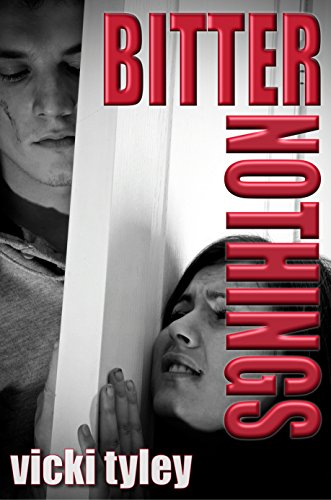 BEST MYSTERY BIGAL'S BOOKS AND PALS 2014 READERS' CHOICE AWARDS Half her family have been murdered in their beds. Her father is the prime suspect. And things are about to get a whole lot worse... Graphic designer Dervla Johns wakes one morning to the news that her father, Warren, is missing and her stepmother and step-siblings were found dead in their beds. While the police hunt for Warren, Dervla searches for answers. Could her father really be a killer? Refusing to be warned off by police threats, or intimidated by the reporter who appears to be following her, she delves into her family's past. But as she uncovers one shocking secret after another, Dervla's world is rocked further by another murder - and she finds herself desperately trying to untangle a web of illicit love and betrayal. Soon, Dervla must face her greatest fear... or suffer the same deadly fate as her stepmother. "If you like mystery fiction with a psychological flair, Vicki Tyley will deliver. She understands that fiction is about real people, and that real people have their dangerous flaws." -Scott Nicholson, Bestselling author of Liquid Fear
Buy Kindle Version 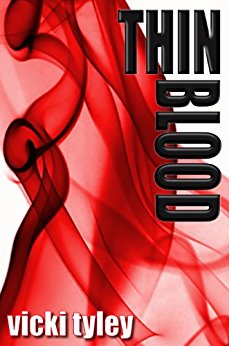 “Page after page of twists make this novel a smashing success.” –Suspense Magazine Craig Edmonds, a successful stockbroker, reports the disappearance of his wife, Kirsty. What starts as a typical missing person's case soon evolves into a full-blown homicide investigation when forensics uncover blood traces and dark-blonde hairs in the boot of the missing woman's car. Added to this, is Craig's adulterous affair with the victim's younger sister, Narelle Croswell, compounded further by a recently acquired $1,000,000 insurance policy on his wife's life. He is charged with murder but, with no body and only circumstantial evidence, he walks free when two trials resulting in hung juries fail to convict him. Ten years later, Jacinta Deller, a newspaper journalist is retrenched. Working on a freelance story about missing persons, she comes across the all but forgotten Edmonds case. When she discovers her boyfriend, Brett Rhodes, works with Narelle Croswell, who is not only the victim's sister but is now married to the prime suspect, her sister's husband, she thinks she has found the perfect angle for her article. Instead, her life is turned upside down, as befriending the woman, she becomes embroiled in a warped game of delusion and murder. “The story flows so easily that before you know what's happened, fifty pages are gone. It practically reads itself.” –Ebook Alchemy
Buy Kindle Version 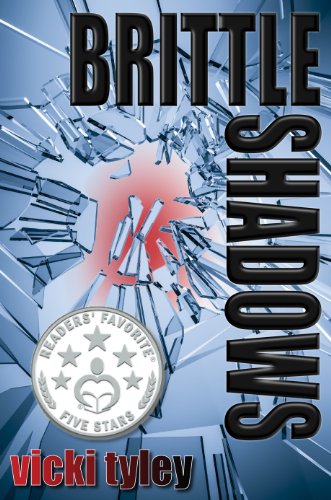 Shadows, like bones, grow brittle with age... When soon-to-be-wed Tanya Clark is confronted with her fiancé's naked corpse hanging from a wardrobe rail in the upmarket Melbourne apartment they share, her life is torn apart. Two months later, distraught and unable to cope, she drowns her sorrows in a lethal cocktail of alcohol and prescription drugs. On the other side of Australia, a grieving Jemma Dalton struggles to come to terms with the suicide of her only sibling. Despite there being no evidence to the contrary, Jemma refuses to accept Tanya had intended to kill herself. Not her sister. Then the coroner's report reveals that at the time of her death she had been six weeks pregnant. The will, too, raises more questions than it answers. How did a young woman on a personal assistant's wage amass shares worth in excess of $1,000,000? In a desperate bid to uncover the truth, Jemma puts her own life at risk and starts to probe the shadows of her sister's life. But shadows, like bones, grow brittle with age. The consequences can be deadly. “If you like mystery fiction with a psychological flair, Vicki Tyley will deliver. She understands that fiction is about real people, and that real people have their dangerous flaws.” –Scott Nicholson, bestselling author of Liquid Fear 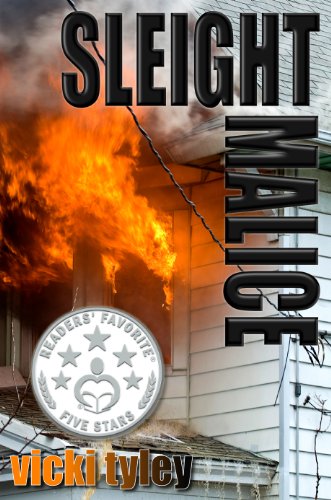 "In perfect Vicki Tyley fashion, 'Sleight Malice' entertains and stuns its readers." Lit Fest Magazine SLEIGHT: use of dexterity or cunning, especially so as to deceive. MALICE: the intention or desire to do evil; ill will. One cold Melbourne winter's night a suburban bungalow goes up in flames. Despite their best efforts, firefighters are unable to save the home. When a badly charred body is discovered in the remains, Desley is devastated. Her best friend, Laura, had been the only one in the house that night - her partner, Ryan, is away in Sydney on business. Then Desley learns the unidentified body is male. But it's not Ryan. He and Laura have disappeared... Desley teams up with private investigator Fergus Coleman to search for the missing couple. Almost too late Desley learns what some people will do to cover their tracks.
Buy Kindle Version 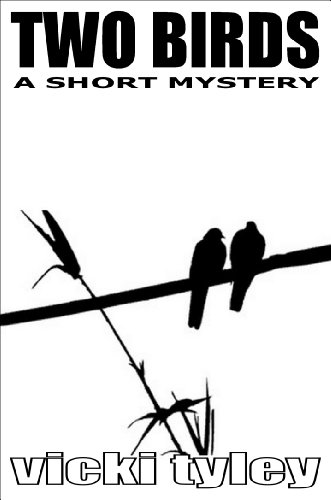 From the bestselling author of THIN BLOOD Kristine Abbey lies unconscious and bleeding on her kitchen floor. Crouched next to her with his hands clamped over the knife wound in her abdomen, her husband, Daniel, screams at the couple's sister-in-law - and his ex-mistress - rooted in the doorway. Time slips away... 3,300 words "Vicki Tyley's short story doesn't disappoint. You'll finish it in no time, and if you think you know the murderer before the end of the story, you'll probably guess wrong. Ms. Tyley is good at that." - Book Boogie
Buy Kindle Version
Scroll to top